A few weeks ago, I urgently felt the need for a light, enjoyable, modern book to read in the midst of all the mess.

I asked around for some fun books to read, and was amply rewarded with many suggestions. Off to the library!  As much as I like certain aspects of reading on my kindle, I wanted actual books to hold in my actual hands.

I was very sad that the children’s books suggested by my dear friend College English Major were not on the shelf.  I could not get a copy of Dick and Jane and Vampires, by Laura Marchesani, or Bill and Pete Go Down the Nile, by Tomie de Paola.  All was not lost;  just reading the brief descriptions of these books on Amazon lifted my spirits:

When innocent Dick and Jane meet a creepy, cape-wearing vampire, the unexpected happens: he becomes their friend!

It's a new school year, as William Everett Crocodile and his trusty friend and toothbrush, Pete, prepare for a class trip down the Nile.

Of the books everyone recommended, only a few were on the shelf in our library. I pulled a few others off the shelf that looked interesting. 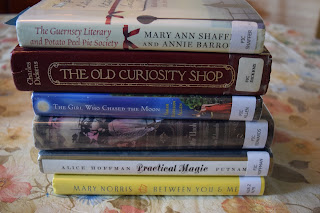 The library's terminology for actual books is Physical Checked Out Items.  Here's what I got:

The Girl Who Chased the Moon - Recommended by friends
by Allen, Sarah Addison.

The Little Book
by Edwards, Selden.

Practical Magic - Recommended by friends
by Hoffman, Alice.
Between You & Me : Confessions of a Comma Queen
by Norris, Mary (Editor).

Younger Daughter has absconded with Practical Magic.  I have already finished Guernsey Literary, which I enjoyed.  I think I'll go for The Girl Who Chased the Moon next.

On my kindle, I am a third of the way through Frankenstein by Mary Shelley, which is for next month’s book club discussion.  On the kindle I’ve also got Lafayette in the Somewhat United States by Sarah Vowell.  She seems to specialize in delightfully snarky historical narrative.

I have the prospect of being able to read this soon!  Across the River, by Melissa Westemeier.  I just ordered it from the publisher.  The author blogs here.

And finally, I’ve been heavily reading Psalms for spiritual help.  - Recommended by God

The Lord is near to the broken-hearted,
and saves the crushed in spirit.

My husband was bereft of books to read, but he rejected my stack and went to get his own. 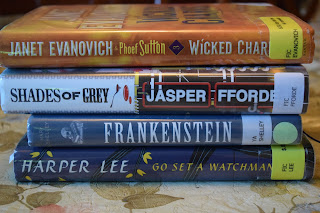 So what's in your reading stack right now?
Posted by Common Household Mom at 6:00 PM 11 comments:

I had this discussion with Younger Daughter today, on the way to the farmer’s market.

YD:  When I get home I’m going to get back to my Grisham book.

Me:  What?  You shouldn’t be reading John Grisham!

Me:  When I was sixteen, I was reading…. I can’t remember.  I guess I was reading Jane Eyre.  And poetry.  Stuff like that.  Jane Eyre doesn’t have gruesome things in it.  It has… well, it has governesses and proper things like that.

YD:   Mom, you do not know much about teenagers these days. I don’t want to read about governesses.

Me:  Well, I guess it did have a madwoman in the attic.  And potential bigamy.  But I didn’t realize that when I was sixteen.   By the way, did you start that book you borrowed from my library book pile?

Me:  DON’T tell me anything!  I hate spoilers.  I can’t even read the book jacket of books any more.  They always tell some surprising thing that happens about a hundred pages in.  I want to discover it when the author reveals it, not from the book jacket.

YD:  Mom. A hundred pages is not that far into the book.  And besides, the stuff they reveal in the book jacket is always obvious to everybody.

Me:  Not to me!  When we had to read The Scarlet Letter in ninth grade, everybody in the class knew who the father was except for me.

YD:  Who was the father?

YD:  Yes, but I can’t remember. And I am not going to read it again just to find out who the father was.

Me:  Okay. No one should have to read The Scarlet Letter twice.

Me:  Yes, he does.  I think I read one John Grisham book. It was called The Runaway Jury.  It was good. It was a page turner, all right.  I think it had cigarettes in it.

YD:  John Grisham books tend to have racy things in them.

Me:  Cigarettes are not exactly racy.

YD: I mean things that sixteen year olds aren’t supposed to have experience with, like cigarettes.

Luckily for her, we arrived at the farmer’s market just then, so I couldn’t question her about racy things that she is not supposed to have experience with.  Nor could I admonish her that she needs to be studying for finals instead of reading John Grisham.  Instead, we argued about whether I was buying too many flowers to reasonably plant in the next few days.  Of course I bought too many flowers!


During the past two weeks some things have happened that make me feel that I and my loved ones have been spiritually eviscerated.  Basically, it’s been a truly shitty two weeks.  I’m devastated, angry, perplexed, and appalled. But I am not going to say anything more about that, because:
After we handed over large suitcases full of money to the plumbers, the process of disemboweling our only abode began on Tuesday with the jack hammering of large portions of the garage floor.  It took the workers all day.  I discovered that jack hammering affects things in other rooms.

The project has proceeded apace.  It seems if you pay people enough money, they will do the job quickly, using space-age techniques where possible.  It’s Friday morning, and we have all new sewer lines in the garage.  We did not find any interesting things, such as casks of Amontillado, beating hearts, or cats, under the floor of the garage.

Also, there is a new sewer line running from the powder room to this main sewer line.  That job was done without digging, using a technique involving a cloth sleeve impregnated with alien sinews.  The sleeve is inserted in the existing pipe, inflated and then some alien juice is added at which point the alien sinews become as strong and as solid as iron or PVC pipe.  This new pipe can never be destroyed because it is from outer space.  Or maybe it lasts exactly five years, which is what the length of the warranty is.


Today, they are doing a similar alien material procedure on the sewer line leading from the house to the municipal sewer.  I will bet that in five years we will be looking for Sigourney Weaver to help us fight the aliens that will be born in this sewer line.

I left the house this morning before the plumbers arrived, but came home while they were working on this.   The process apparently requires that the cloth pipe be ironed before being installed.  This is the first time in six years that an iron has been used on our property.  The length of cloth pipe they need ran the entire length of the driveway.

The procedure also required them to bring in this Dalek, which I found sitting in front of the clothes washer.  Since Dr. Who is unlikely to show up anytime soon to protect me, I am clearing out and taking myself to a place where I can finally get a cup of hot tea, a mark of civilization which, for me, requires the presence of another mark of civilization, that is, a working bathroom.

Dr Roto-rooter called the substance “resins”.  But I am pretty sure the material is alien.

A few days ago, one of my most loyal readers turned to me and said, “Mom, you haven’t posted anything on your blog lately.”

To which I replied something like, “Yep.  I’ve been busy.”

But inside I yelled, “THAT’S BECAUSE I’M IN THE SANDWICH!”   The sandwich generation, that is.  Doing my tasks as parent and as adult niece of elderly people and as regular citizen has lately been time-consuming.  More on that later, or perhaps not at all.

Nevertheless, I have faithfully been writing notes to my resident high school student for every school-day morning.  I usually write these on the back of scraps of paper discarded from other projects.  In addition to the “Monday Morning Quiz” format, I sometimes try to find interesting quotes. Wednesday night I was delighted to pull out a piece of scrap paper for my morning note and find a discarded powerpoint presentation, with quotes already on it from two different distinguished famous people!  This saved me the time it would take to look up and copy quotes.

I added my own personal touch and left the note at the table.

The quotes say “Success is not the key to happiness.  Happiness is the key to success.  If you love what you are doing you will be successful.”

And then I wrote:
Look!  It’s a pre-printed Morning Note!  With pithy quotes from famous people!
I hope you have a pithy day.
Today is Uncle’s birthday.
Love,
Pithy Mom

My husband saw the note the next morning.  He said, “What is on this Morning Note?”  I said, “Isn’t this great?!  It’s some quotes by famous people. Usually quotes are said by either Albert Einstein or Abraham Lincoln, but these are said by Albert Schweitzer and Buddha.”

It wasn’t until much later that I saw that in the above note, both Albert Schweitzer and Buddha said exactly the same thing, and in English, even though neither of them was British or American.

Here are some other pithy quote Morning Notes:

A Quote for today
“I would strongly advise you to make up your mind, shoulder your gun, muster all your spirits, and start in search of the interesting unknown.”
- John James Audubon
(Either that, or just get to the bus stop on time.  I do not recommend taking a gun.)

“The journey of a thousand miles begins with one step.”
- Lao Tzu

“I hope you make it to the bus stop this morning.”
- Mom


A quote for today:
“Think left and think right and think low and think high.  Oh, the thinks you can think up if only you try!”
- Dr. Seuss
Have fun thinking thinks today!
Love,
Mom

And God said, “Let there be light” and there was light but the Electricity Board said He would have to wait until Thursday to be connected.
- Spike Milligan

I wish you a tolerable Thursday.  That’s all any of us can hope for.
- April Winchell

I wish you a tolerable weekend.
Posted by Common Household Mom at 6:33 PM 3 comments: