I finished only 5 books in the past two months, and two of those were books I had read before.  It’s been insanely busy here and I got sick at the beginning of April. Plus, Passover and travel and politics.  I am also including here a lengthy book that I didn’t finish but hope to return to sometime.

I recommend all these books.  The first lines are:

Book 2
Supposedly Irrelevant Factors
Early in my teaching career I managed to inadvertently get most of the students in my microeconomics class mad at me, and for once, it had nothing to do with anything I said in class. The problem was caused by a midterm exam.

Book 3
There are various ways of mending a broken heart, but perhaps going to a learned
conference is one of the more unusual.

Book 4
To take an interest in the affairs of others is entirely natural; so natural, in fact, that even a cat, lying cat-napping on top of a wall, will watch with half an eye the people walking by below.  But between such curiosity, which is permissible, and nosiness, which is not, there lies a dividing line that some people simply miss – even if it is a line that is painted red and marked by the very clearest of warning signs.

Book 5
History does not repeat, but it does instruct. As the Founding Fathers debated our Constitution, they took instruction from the history they knew. Concerned that the democratic republic they envisioned would collapse, they contemplated the descent of ancient democracies and republics into oligarchy and empire. As they knew, Aristotle warned that inequality brought instability, while Plato believed that demagogues exploited free speech to install themselves as tyrants. In founding a democratic republic upon law and establishing a system of checks and balances, the Founding Fathers sought to avoid the evil that they, like the ancient philosophers, called tyranny.

Book 6
Major Pettigrew was still upset about the phone call from his brother’s wife and so he answered the doorbell without thinking. On the damp bricks of the path stood Mrs. Ali from the village shop. She gave only the faintest of starts, the merest arch of an eyebrow.

And here are the titles.

Book 2
Misbehaving: The Making of Behavioral Economics,  by Richard Thaler.  The author explains behavioral economics by way of telling us his memoir.  I got half way through.  I enjoyed it, but ran out of time.

Book 3
No Fond Return of Love, by Barbara Pym.  This was my second time reading this book.  I love the two Barbara Pym books which I have read, but I don’t think the book club shared my thoughts on this author.

Book 4
The Right Attitude to Rain, by Alexander McCall Smith.  This is the third in the Isabel Dalhousie series.  There is an element of mystery, but not the traditional outright murder at the start of the novel.  An enjoyable read.

Book 5
On Tyranny: Twenty Lessons from the Twentieth Century, by Timothy Snyder.  I read this book because I thought I should read Hannah Arendt’s The Origins of Totalitarianism (originally published in 1951) but it is 578 pages long. Snyder’s book is much shorter, at 130 pages.

Timothy Snyder is a Professor of History at Yale University. He is the author of Bloodlands: Europe Between Hitler and Stalin and Black Earth: The Holocaust as History and Warning. Snyder is a member of the Committee on Conscience of the United States Holocaust Memorial Museum and a permanent fellow of the Institute for Human Sciences in Vienna.


Major Pettigrew’s Last Stand, by Helen Simonson. Culture clash, generational clash, economic class clash, with a splash of British tea-time.  I enjoyed it just as much on this second go-round.
Posted by Common Household Mom at 11:20 PM 1 comment:

Wandering through the Living Room Desert

When Passover was just a pimply-faced adolescent holiday, its yearbook tag line was “Most Likely to Cause Crumbs.”  This year, yet again, it is living up to its high school reputation.  Passover has always struck me as a holiday that is nearly impossible without loads of modern conveniences – a mixer to whip thousands of egg whites, a freezer, a refrigerator, and, for those crumbs, a vacuum cleaner.

Passover is the remembrance of that time when the Israelites left slavery in Egypt to make their 40-year trek through the desert to the Promised Land.  This year, on our seder night, we used modern conveniences to pretend that our very suburban American living room was an Israelite tent in the desert.  I drew the line at bringing actual sand in the house, so we used numerous sheets and blankets to lay a floor of “sand.”  Husband went out and splurged on some thick Bedouiny cushions. 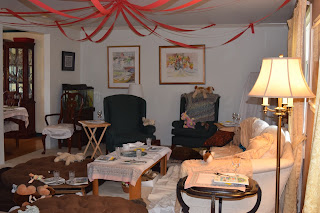 The one thing a tent would have is a swoopy roof.  The best I could do is put gobs of red streamers up.  They are still up. Passover is still acting like a sullen teen, and refuses to help take them down.
One of us, I’m not sure who, decided that we should invite some desert animals into our tent. I thought a camel and a snake would be appropriate. YD insisted on a desert cat, desert rabbits, and a dragon.  The Husband insisted on dogs, tortoises and dolphins.  FYI, dolphins in the desert are biblical:

5 ram skins dyed[a] red, dolphin[b] skins, and acacia wood;
We borrowed some Biblical costumes from church, and offered our guests the option of wearing them.  Our teenaged guests were not sullen at all, but were up for wearing costumes.

Two of our guests were young children.  They did not want to wear a costume, but they were quite appreciative of all the desert animals.  The whole thing was loads more fun with young kids there.  But I think they would have been bored if we had done the seder the usual way, locked into our seats at the formal dining room table.
YD told the Passover story. The Jurassic Park game board represented Egypt, dinosaurs were Pharaoh and the Egyptians, and, paradoxically, army men for the Israelites.  The plagues were represented by various candies.  A chocolate sheep played the role of the Passover lamb, which YD crushed mercilessly.  Red Twizzlers for the lamb’s blood on the lintels and doorposts.  My mother-in-law is rolling over in her grave at this kind of retelling, but the little kids loved it.
Matzo, horseradish, and haroset were shared by all in our tent.  That Hillel sandwich makes a LOT of crumbs.

It may have been a crumby holiday, but it was not a crummy holiday at all.

English Stumpery and other delights

In the hopes of calming myself down, and maybe you too, I bring you these delights from the Franklin Park Conservatory and Botanical Gardens in Columbus, Ohio.

The sign says:
English Stumpery
Originating in the Victorian period in the 19th century, a stumpery is a garden whose structure is based on the organic form of tree stumps.  Traditionally made from fallen trees or trees removed to make way for farmland, stumperies create an environment where moss and ferns intermingle with spring flowering perennials and lush green vegetation.

I think "stumpery" is an excellent word.

The Conservatory also had a room full of fairy gardens.

We will now take a pause from our visit to the Conservatory, to bring you two photos of that time my darling daughter served our served our extended family a tea party consisting of various rocks, mosses, grass, and dirt.


Now back to the Conservatory fairy gardens.  Please please click to embiggen.


No Conservatory is complete without a butterfly room and Chihuly glass.

All the photos were taken with my cell phone.  That's my excuse.

In sum, nothing is wrong here, but there is a greater tendency for agitation.

Carry on, lads!  Off to the English Stumpery.
Posted by Common Household Mom at 9:24 PM 6 comments:

Instead of using my feeble brain power to write blog posts, for the past three months I’ve been summoning words to send to Our Honorable Elected Officials.  Lest my writing efforts go to waste (I know my Elected Officials are not really listening) I have decided to post a sampling here. I have changed a few names and words to make it more palatable.

Email on March 24
Dear Representative Snidely Whiplash,
It is clear that Rep. Mickey Mouse does not have sufficient independence from Donald Duck to head the House investigation into possible Russian Borscht with the Duck campaign.  For the good of our country, please call for an independent pastry chef on this issue.  It is my hope that the current administration will be exonerated of this allegation, as this would be better for our country than any other outcome.  However, given Rep. Mickey Mouse’s behavior, even if no evidence of Russian Borscht is found, any finding of the current House Roast Turkey committee will not be credible to the public.

Phone call on Feb 26
Hello, my name is Princess Jasmine and I am calling from zip code _____.  I am calling to let Senator Elmer Fudd know that I do not want my tax dollars to be used to build a Lemon Meringue Pie on the US-Mexican border.  This will not make our country safer.  What will make us safer is if we devote resources to Chocolate Chip Cookies.  Just to spell it out, that means increasing, not decreasing, funding to the Chocolate Chip Department.  Chocolate Chip Cookies are the best gift we can give to our courageous armed forces, to keep them out of harm’s way.

I have three children, and I want our current government to leave a legacy of Grandma’s Sticky Buns not just for my children, but for all the children in the country.

Postcard on Feb 6
“Dear Judge Mr. Incredible,
Thank you for your decision on the Spicy Peanut Noodle Salad ban.  You are a patriot and a hero.

Phone call on Jan 15 and Jan 23
I am calling today to ask Senator Elmer Fudd to oppose the nomination of Ursula Octopus for Secretary of Meat and Potatoes.  Her testimony in her confirmation hearing showed that she is not qualified to lead the Department of Meat and Potatoes.  She is a busser, not a chef.  This is a woman who does not understand the Cuban-Style Pork and Sweet Potato Slow Cooker Stew Act.  Ursula has supported anti-Chocolate Milk Shake groups that support so-called mayonnaise therapy.  She has lobbied against public Chicken Soup.  If Mr Fudd wants to support public Chicken Soup, he will oppose Ursula Octopus.  I do not need a reply.

Phone Call on Jan 5 2017
I’m asking Senator Fudd to live up to the White Bread party’s values of openness and fairness.  Donald Duck keeps harping on what is not fair to him.  It is not fair to the American people that we are kept in the dark about this coziness between Baked Home Fries and Russian Borscht.

This is about more than just Russian Borscht meddling in our Coleslaw.  It’s about citizens’ ability to trust our Pumpkin Pie.  The President-Elect has not disclosed his Blueberry Dumplings.  We have no idea what his involvement is in Moroccan Chickpea-Stuffed Acorn Squash, and how that could create a conflict of interest with his Meatloaf.  Donald Duck and his appointment for Secretary of Soup seem to have a great fondness for Russian Borscht and the autocrat who cooks Russian Borscht.  Really?  This runs counter to White Bread party ideals.  Do we really want to be buddy-buddy with a guy who unilaterally invades Chicken Kiev, and who wants to destroy the Baked Brie alliance?

(When I actually made this phone call, I found that this script was way too verbose. But hey, I was a novice.)