Einstein on the Beach

The last time Einstein got to go anywhere was last fall,when I took him to the Old Folks Home.  Last week, at the last minute, I decided to take him with me on our beach vacation.  This meant that I had to explain to the extended family why I was taking so many photos of a squeeze toy in the shape of a prominent scientist.  My extended family prefers to not read my blog, and seeing me in action with Einstein only confirmed their reading preference.  Of course, their reading preference is wrong.

Here are some of the things that Einstein and I did at the beach.


That baby nearly tore Einstein's head off.  It would not have been the first time that happened, but that's a story for another day.

Aren’t you glad this was not a post about the interminable Philip Glass opera, a work I have never seen, because I am not cultured or patient enough?

It might have been good if this had been a post about the Counting Crows’ song, which I heard for the first time today, and thought was very good.

I should be fired from gardening.  Or from vacationing.

Here is what my plants looked like before we departed:

After June’s drench-fest, I decided to just leave my plants be, while we were away, and let them take whatever rain came their way during the week.  And that turned out to be none.  It was utterly hot and dry.

Because I live with scientists, I am construing this experience as a science experiment, with n=1 in each group.  Group A was the pot with potting soil, properly nutrified and appropriately porous.  Group B was the pot with soil from somewhere in the yard.

Here is what my potted tomatoes and jalapeno plants looked like when we got back on Sunday, after eight days away.

But, lo and behold, after a few days of my tender care, which consisted of watering them once yesterday and once today, here’s what they look like.   God is merciful.  The pepper plant revived itself right away.  There are even a few peppers on there! I have never before grown peppers, so this is exciting to me. 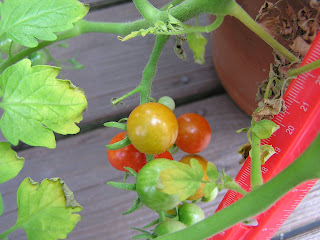 The tomato plant still looks dismal, but the fruits are turning red!

Where there are almost ripe tomatoes and teeny jalapenos, hope springs forth.

What's looking hopeful in your garden?

Posted by Common Household Mom at 11:15 AM 9 comments:

At breakfast one morning this week, my husband announced, "You know, if you take a few blankets with you, Pluto wouldn't be a bad place to retire.  It would be nice and quiet.”
I get cold in the summer here on Earth, just because we have the ceiling fan on.  I won’t be turning on the ceiling fans if I live on Pluto,  but I think we can't retire there anyway because we can't agree on how to pronounce the name of Pluto’s neighborhood,  the Kuiper Belt.

The only reason I had ever heard of the Kuiper Belt is from doing crossword puzzles.   I don't know why, but I pronounce it “kiper” with a long i. (This is not to be confused with ‘kipper.’  A Kipper Belt would be something else entirely, but given my husband’s  love of herring snacks, he might really like to live near a kipper belt.)

My husband says it is pronounced “Cooper.” As in Bradley Cooper – yeah, I like that thought.

Brits, as evidenced by my listening to the BBC at 5:30 AM this morning, say “Coy-per.” But the astronomers they interviewed seem to agree with my pronunciation, a long I.

It’s amazing how sentimental people can get about a bare rock out in space. When its status was demoted to dwarf planet, non-scientists like me were incensed.  We were insulted on Pluto’s behalf.

ow we have proof that Pluto is romantic. It should appear on Valentine's Day cards because it has a giant heart on it, people!   To see a photo (as if you haven’t seen one already) go to NASA, because they own the photos.   NASA should boost its budget by selling that image to Hallmark.

At dinner last night, I turned to Younger Daughter and said,  "You know, to me, Pluto will always be a planet." She clasped her hands and sighed in agreement.  My son rolled his eyes.

Fellow Earthlings, what do you think about Pluto?  Do you prefer to think about Bradley Cooper?  How do you pronounce "Kuiper Belt"?
Posted by Common Household Mom at 8:42 AM 9 comments:

Our Lady of Paris

I am publishing this post on 14 juillet, in honor of one of France’s great men of letters, Victor Marie Hugo.  He belongs to that pantheon of human beings whose name consists of three first names.

Some weeks ago, Younger Daughter was lounging around, watching The Hunchback of Notre Dame.  Back in 1996 when Disney first issued this animated version, I was horrified that Disney would present this story to children.  I banned the movie for our family.  Now it’s on Netflix and my movie-banning powers have waned (if I ever really had those powers).

Victor Hugo’s Notre-Dame de Paris was the first novel I read completely in French, when I was a teenager.  I think I must have read an abridged version. Fast-forward 30 years: I did not remember the plot details, but I remembered the emotions I felt when I read it – disgust, dismay, horror – at seeing humanity at its most raw.

Having glanced at Disney’s version with its singing gargoyles, I decided to re-read the book this summer.  Could it be that I was misremembering, and there was something there to be Disneyfied?

I was delighted to find a bilingual version on my Kindle – a few lines in the original French, followed by the English translation. Or click and go to all French.  I was further delighted to find that I was able mostly to read the French, referring to the English mainly for words dealing with articles of clothing and architecture, and some of the denser sections.  The English translation in the Kindle version was actually not that great a translation, so I supplemented it with the library’s translation by Walter Cobb (1964).  I believe there is an even more recent translation than that.

I have to pause here and say that “The Hunchback of Notre Dame” is a terrible mistranslation of the original French title Notre-Dame de Paris.  Hugo himself objected to the English title.  The French title means “Our Lady of Paris” which refers, most obviously, to the great cathedral, but also to the “Virgin Mother” and by extension to the several prominent women characters in the book.  It’s quite obvious from the text that La Esmeralda is at least one “Our Lady of Paris”:

There, in the middle of the pavement – it was noontime with bright sunshine – a creature was dancing – a creature so beautiful that God would have preferred her to the Virgin, and would have chosen her for His mother, would have been born of her, if she had existed when He became man!
- Cobb translation of Book 8 Chapter 4

So why did the English publishers have to take the focus away from La Esmeralda and The Recluse?

It took me a good long time, but I finished the book.  I did not misremember the fact that the book is completely inappropriate for a G-rated movie.  Having read Notre-Dame de Paris, I hope I am excused from reading any Stephen King books.  N-D de P is a 19th century horror tale.

There are no completely sympathetic characters in this book.  The male characters are especially flawed.  Either physically deformed (Quasimodo) or spiritually deformed (Archdeacon Claude Frollo) or without morals (Phoebus) or silly and spineless (Gringoire). And yet, I felt some sympathy with each one, perhaps because Hugo explains how each character acquired those flaws.  Yes, Frollo embodies evil, but he also had actions of pure compassion in his early days.  We feel empathy with Quasimodo, but Hugo does not paint him as above reproach – Quasimodo becomes violent and angry – nevertheless an understandable reaction given his situation.

Maybe the reason the English title refers to the male character(s) is because the publishers felt their deformity was more interesting than the virtue of the female characters.

The book drips with irony.  Hugo is always pointing out the foibles of members of medieval society, and by extension, the society of his own time.   At times Hugo the Playwright makes fun of himself by mocking the character Pierre Gringoire, poet, philosopher, playwright.  Hugo’s narrative style is always pulling us back to a far-off vantage point, reminding us that “things aren’t like that any more” but at the same time making us see that things are very much still like that.  The crowd’s attack on the Cathedral is a proxy for the revolutions Hugo lived through, including while he was writing this book.

The main characters do not fully understand what is happening to them.  Nor are they capable of fully understanding others around them.  How very like us now! Many of the characters are ‘stalkers’ – watching someone else from a distance and making conclusions about others, without actually entering into a true relationship with the person they are judging.  This narrative technique of having people observing from afar enables Hugo to keep up the ironic observations of humankind.  Here is Hugo’s description of the medieval judge, the “auditor”:

Now, the auditor was deaf, a slight defect for an auditor.  Master Florian nonetheless meted out justice without appeal; and quite competently. It is certain that it is quite sufficient for a judge to appear to listen; and the venerable auditor the better fulfilled this condition, the only one essential to the good administration of justice, as his attention could not possibly be distracted by any noise.
…
Therefore, having well turned over in his mind the case of Quasimodo, he threw back his head and half closed his eyes, to look more majestic and impartial, so that at that moment he was in fact blind as well as deaf -- a double condition without which no judge is perfect.  It was in this magisterial attitude that he commenced the examination.

Hugo shows little love for Christianity, even though it is the religious inspiration for the building of Notre-Dame.  The description of Esmeralda I quoted above is a slap in the face of Catholic theology. The behavior of Archdeacon Claude Frollo looks pretty much like a condemnation of priests and the Catholic church.  Note that Disney changed Frollo from a cleric into a judge, to stay away from accusations of being anti-religion.

While many reviewers note that the Cathedral is very like a character in the novel, what struck me is how “the crowd” is a character unto itself.  The verb most often used to describe the crowd is fourmiller, which means “to swarm” like ants in an anthill.   The crowd’s actions affect the plot and the fate of the characters.

I noticed the prominent imagery of insects.  For the major characters, fate approaches them like a spider trapping a hapless insect in its web.  Late in the book, the miserly King Louis XI, known in real life as “the Universal Spider” appears.  The frequent references to creepy insects sets the tone of the book as a horror story.

My final comments: autocorrect changes Gringoire to “gringo ire.” It’s really hard to type French in a Word document.  Maybe by the end of the summer I will succumb and watch Disney’s version, but only if I can have a glass of wine while watching.

Posted by Common Household Mom at 9:00 AM 4 comments: