I solemnly swear that I am up to no good. 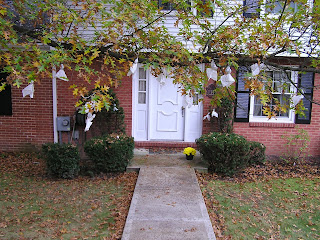 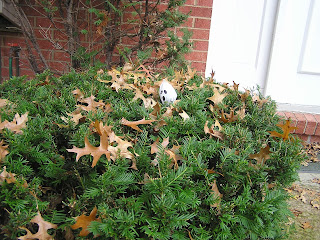 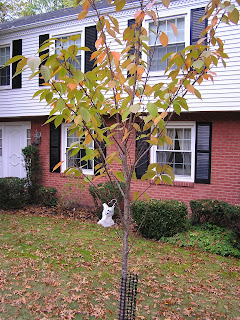 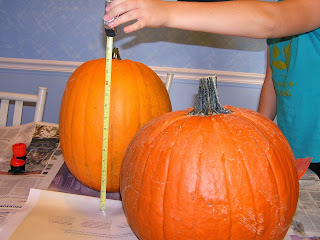 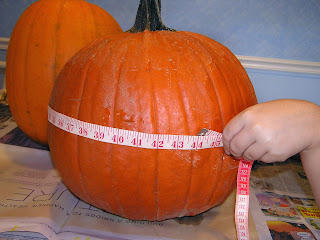 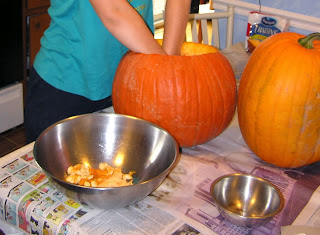 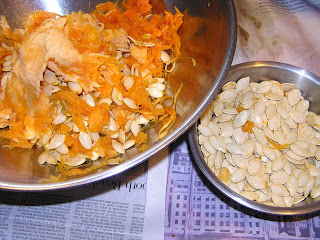 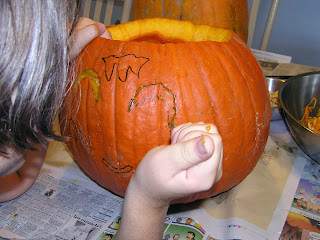 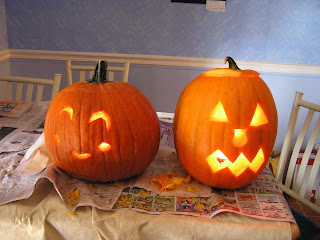 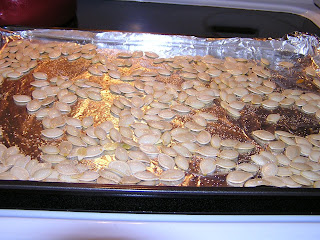 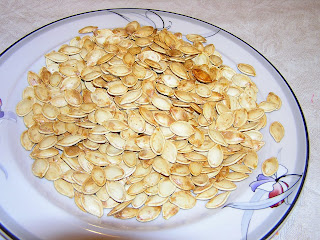 (And that is the complete extent of our Halloween decorating.)

Any  Halloween mischief where you are?

This post is either 6 days early, or one year late.  This pumpkin decorating contest took place for Halloween 2012, at The Old Folks' Home.  Aren’t they clever? 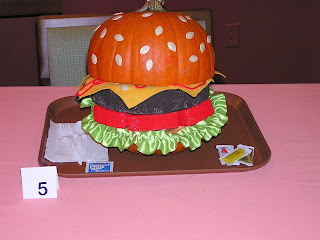 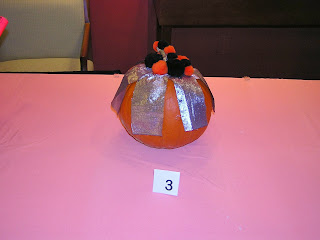 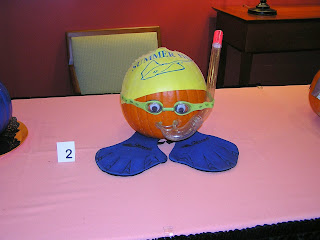 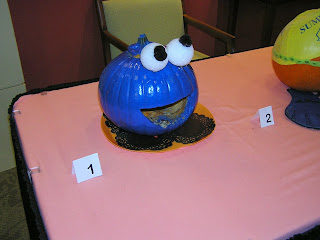 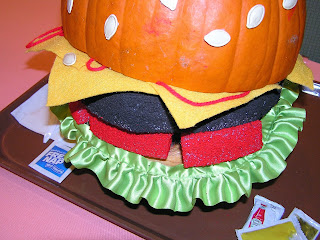 The other thing that happened last year at the Old Folks’ Home is that they decided to have a costume party.  My aunt, who moved there in February 2012, was asked to be a judge for the costume contest.  She thought this would be a harmless way to meet new people, so she agreed.

Well.  At the party, two people dressed up as prostitute and pimp (sorry, no photos).  The Old Folks’ Home Management told them they weren’t allowed to dress that way.  This created a ruckus, as some of the judges wanted to give those two an award.  The competition among the remaining participants was fierce and political.  In the end my aunt shrugged off the experience, but it turned out that being a judge for this event was not a great way to win friends.
Posted by Common Household Mom at 11:52 AM 4 comments:

Green Girl in Wisconsin has asked us for crockpot recipes.  I love cooking in the crockpot and concur with Green Girl that crockpot meals bring inner peace.

Here's one of my husband's favorites.  My son also likes it, and he can be pretty picky.  He calls it Crackpot Chicken, because that's how he rolls.

I love how it tastes, and also that I can make it with as much or as little chicken as I need for a meal.  If you are making a smaller amount of chicken, use a smaller crockpot.

Youngest Daughter says that peanut butter doesn't go with chicken, so she won't eat it.

The Directions.
--put the peanut butter into your crockpot and turn it to high so it can begin to melt
--add the other sauce ingredients
--stir to mix
--add your chicken; toss to coat.

Cover and cook on low for 1.5-3 hours. This is done when the chicken is cooked through and has reached desired tenderness.  If your crockpot isn't at least 2/3 full, keep an eye on it so the peanut butter doesn't burn. You may need to stir a few times.

I got this recipe from Stephanie O'Dea's blog, A Year of Slow Cooking, which has a cajillion crockpot recipes.  She made it with frozen chicken, but I can never bring myself to put frozen meat in the crock pot.  Her recipe also calls for cooking it for a much longer time, but I've found that does not make for a desirable texture for the chicken.  I usually put it in the crockpot in the mid-afternoon to have it ready for dinner at around 6 or 7 pm.
Posted by Common Household Mom at 3:22 PM 4 comments:

Lo, They Have Returned

In the second or third week of the tenth month, there shall be a break from the learning in the halls of academe.  Each student shall return to his place of origin, lo, unto the city or small town or farm or suburb of his infancy.

Both the oldest daughter and the middle son shall return, each to their parents’ house.  There, she shall rise up at mid-morning and wrap herself in a blanket.  In like manner, he shall sleep in until noonday, and then occupy the breakfast table with sundry and divers food preparation.  Despite the sudden lack of space at the table, there shall be all manner of glad banter – it is a blessing from the Lord.
Then shall the children of the house join in battle over the piano. They shall make a joyful noise.  First the oldest will prevail, playing her lyrical songs with arpeggios and lovely melodies.  At the moment she rises up and departs from the piano bench, the middle and youngest children will come nigh; lo, they will fully occupy the piano bench together.
Verily, then shall the youngest child mock her older brother with these words, “I wrote this music! I bet you can’t play it.”  Yea, though she hope that he will be able to play it, she will continue in her provocation, for truly that is the purpose of little sisters.  And it shall come to pass that together the brother and the sister do play the song, and the notes are sweet and pleasant to the ear.

And lo, after a time the youngest child shall grow weary and depart thence in search of refreshment, knowing that that very day her father hath brought Doritos into the house.  Then shall the middle son fully rejoice in his victory at the piano by playing the big pieces by Rachmaninoff and by Beethoven and that duet by Saint-Saens for which his mother has not touched her part since August.

And behold, the entire time of the noise of this great host of children, the father of these very children shall be napping.  This is right and seemly; marvelous are the works of the Lord.

Then shall the mother of the household say, “Behold how good and how pleasant it is when kindred dwell together in unity.  It is a blessing from the Lord.”

On Monday, Youngest Daughter had the day off school.   Despite my not being paid since August (which had nothing to do with the government shutdown), I had work to do.  And all those leaves were waiting on the lawn.  Mid-afternoon YD indicated that she had run out of her own fun, so I told her to go rake leaves for 20 minutes.

After a long while she came back in.  I went out and saw in the front yard, which faces north, these leaf piles, scattered rather like chicken pox.

Apparently it was my job to put the leaves in the yard waste bin.  I worked on it for a little while, and then came in and got distracted by an important phone call.  I forgot all about the leaf piles, but YD didn’t.

A while later, YD bounced back inside and announced, “The South is the New North!”  Sure enough, there were new leaf piles in the southern part of our yard.  It turns out that her leaf piles were all cities, and elaborate political machinations had occurred between the piles, with treaties, alliances, wars, and invasions.  She explained it all to me at length.  Great length.  Eventually peace was achieved between the leaf cities.

Knowing that rain was coming on Wednesday, alas, on Tuesday I had to destroy all those cities and create a megalopolis at the top of the street.  Soon the leaves will all be sucked up in the leaf truck.  I hope YD’s imagination will not be, because there are plenty more leaves to be civilized.

One way to get out of a funk is to put everything aside, throw some clothes in a suitcase and drive 5 hours to see friends you haven’t seen in 20 years.  With only minimal planning, we left Youngest Daughter at home and went to my 30th college reunion.  Three of my college friends (plus my husband, who is also a college friend) came to the reunion; other than that, I was anonymous, which was just fine with me.   That’s the way an introvert likes a reunion.

For 24 hours I did not think about those things that have been irking me – no newspapers, no e-mail, no radio.  It was great!  Instead, my focus of concern was that we left YD at home alone for 24 hours.  People tell me there is a movie of this name, but I have never seen it.  People also warn me that I should not watch it just before leaving my child home alone.

I left YD a note taped to the front door, reminding her what to take to her marching band event.  I was proud of my balance of the maternal Need to Remind with the contradictory Avoidance of Parenting Helicoptorially.  I simply wrote, “Take key!  Turn on outside light!”

Before we left, though, my husband added more instructions all over my note, exhibiting a futile Hope for Useful Labor from a Teenager.  “Feed the fish!  Rake the leaves! Tote that barge!  Lift that bale!”

I called YD Saturday afternoon just to see how she was doing.  She said sweetly, “Thank you for the note, Mommy!”  I expressed equivalent gratitude to her.  Then she said in a commanding voice, “Tell Daddy that except for feeding the fish, I am not going to do any of those things he wrote on there.”   And she didn’t.

So all three of us had a good weekend.  When we got home, I asked her, “What happened here while we were away?”  She said, “Nothing happened, and I enjoyed every minute of it.”