In celebration of my son’s 18th birthday earlier this summer, I put together this tableau detailing his culinary tastes over the years.  They can be summarized this way:  Don’t try to feed my son a vegetable.

Here are the details.

Age 8
The second grade teacher asked each student to fill out a form: name, age, best friend, favorite color, hobbies, etc.  And this was one of my son’s responses:
In my spare time I like to eat dairy products.
* * * * * *
Son decided to name  “a new species:  Homo Macaroniusandcheesus.”

Age 14
Common Household Husband: Son, are you hungry?
Son:  A little bit.  I will be hungry at some time in the future, so I might as well eat now.

Age 15
I came in the kitchen to cook dinner, and found Son with 4 slices of bread spread out on the cutting board.  The peanut butter, jelly, and a slice of American cheese were nearby.  I said, “What are you doing?”  He said, “I’m making my lunch for tomorrow.”   I said, “Are you making a quadruple decker sandwich?!”  “No,” he said, “I’m making a double single decker.”  In other words, two sandwiches.

And so it has continued to this day.  To his credit, he has been known to make a salad for others, athough he won't eat it himself.  He valiantly supports the peanut butter production industry. He will eat tofu.  But not quimby.

What was your favorite food when you were growing up?
Posted by Common Household Mom at 8:00 AM 5 comments:

In honor of our Sunday night Bible study finishing our study of Exodus (chapters 1-15), I bring you these scenes from this year’s Passover celebration.

But first, a little Yiddish vocabulary for this post:
Knaidel = dumpling
Nudnik = an annoying person; a pest.

While getting ready for Passover, I read a Passover trivia question from the hagaddah to the family:

“What instrument did Miriam use to lead the women in dance at the Sea of Reeds?”

Husband replied, “French horn!”
Youngest Daughter (correctly) said, “Tambourine!”
YD:  Did they have French horns?
Son:  They didn’t even have France back then.
* * *
I read a line from the haggadah:  “The matzo is a metaphor for our own lives…” and I asked the Common Household Husband to comment.  He said, in a rabbinical voice, “The matzo is a metaphor for our lives, which are flat and crumbly.”   Youngest Daughter added, “And which taste like cardboard.”  (Like they have it so hard.)
* * *
YD was helping me cook.  After we got the brisket in the oven, it was time to make the next item.  I said, “Which is more important to you, the potato kugel, or the soup?”  She said, “Oh, we have to have matzo ball soup!  I just love matzo ball soup!”

I put on my sweetest Momma voice, the voice in which you have to tell your kids something disappointing.  “I’m sorry, sweetie, but this year we’re not having matzo balls.  We’re going to have potato knaidlach!”

She said, “Good!  I hate matzo balls! What is knaidlach?”

Ah, all this time, I have been deceived.  It is merely the chicken soup that she likes.

Knaidel is a Yiddish word meaning “dumpling”.  The plural is knaidlach.  The “k” is pronounced.   The word can be used for matzo balls as well as potato dumplings.  I showed YD the recipe.

I had never made potato knaidlach before, but when you are about to leave Egypt for the Promised Land, it’s time for adventure in the kitchen.  The knaidlach were pretty easy to make – sort of glorified mashed potatoes with eggs added, and then plopped into a pot of boiling water for a few minutes.  The experience was joyful, partly because nobody was telling me what size to make them, and partly because I was making them ahead of time.  Yes!

The guests arrived, we finished the cooking together, and then sat down for our seder meal.  Many blessings, dipping parsley in salt water, hiding matzo, asking four questions, ten plagues, crossing the sea, dayenu, symbolic food, more wine, etc, etc, and then SHULCHAN OREYCH – THE MEAL IS SERVED.

We started with the soup.  I explained that we had potato dumplings.  YD said authoritatively, “They are called k’nuds.  I would like a k’nud with my soup.”  She rhymed it with “wood.”

Somebody asked, “What?  A canoodle?”

I said, “A knaidel.  A knaidel is a potato dumpling.”

Pretty much everybody wanted at least one, although everyone called it something different.
* * *
In our Bible study, I suspect everyone learned something different from the Exodus story.   Without doubt, it is a rip-roaring good yarn.  It has inspired people throughout the centuries to push for freedom from oppression.  Here’s what I learned:  Moses was a nudnik to Pharaoh, but Pharaoh deserved it because he had no humility.  Getting free from slavery wasn’t easy and it involved a lot of suffering, and even then, leaving Egypt was only the start of the difficult times.  The story also says, over and over, that God is more powerful than Pharaoh.  Despite that power, paradoxically, God works through people, whether they are nudniks or dumplings.
Posted by Common Household Mom at 4:54 PM 3 comments:

The Shallow Thoughts of a Reluctant Gardener

Since Wednesday morning, I’ve been plagued by vertigo (again).  Just my luck that this week we had the most beautiful weather – sunny days and moderate temperatures – and I was unable to take advantage of it.  After dosing with meclizine for three days, finally today I felt I could do more than lie in bed.

Green Girl’s question ‘What are you surrounded with?’ (my answer: weeds) spurred me to action.  I yelled to the resident teens, “Who will help me weed the garden?”   All the teens were wearing noise-cancelling headphones, a tactic they find useful when their parents ask them to do things.  So I gathered my tools and went outside by myself.


I like the thought of gardening and like the result of having pretty plants, but I do not like the effort required.  I am afraid of the attack rabbits and gaboon viper snakes that surely lurk beneath the surface.  Therefore, I am terrified of putting my hand in places like this:

Here we must take a side trip to visit my husband’s gardens.  With absolutely no work on his part, here is his garden on the side of the house, weedless and abundant. 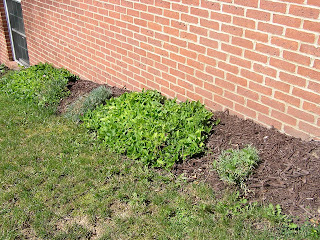 And here is his hanging tomato planter, bursting with healthy cherry tomatoes. 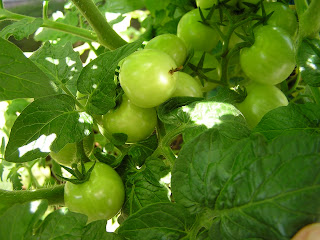 Back to my garden, which is on a steep hillside adjacent to The Widow Douglas’ property.  Weeding this spot is difficult work, but it would bring joy to The Widow Douglas’ heart to not have to look at all those weeds every day.  I stuck my hand in the dark places, fearlessly exposing the front door, in an Anthony Weiner-like manner, of the rabbit dwellings.

After about 45 minutes I had finished a large swath of the hillside.  There is still a lot of grass in there, but it isn’t tall grass, and isn’t visible to The Widow Douglas, so it doesn’t count.


It was then I saw that one of the gladiolus plants is pregnant.   The gladiolus creates a terrific foliage every year, but rarely grows buds.  When buds do form, the deer usually eat them before they bloom.  This year, thanks to Cassi’s recommendation, I was ready.  I have a full bottle of Liquid Fence and I’m not afraid to use it.  Well, I am afraid to use it if there is a little breeze that will blow the spray back onto me.  Liquid Fence has an interesting odor, something like wolf poop, or wet clothes that come back from camp and are forgotten at the bottom of the suitcase for a week.  The first time I used it was a few weeks ago, to save my balloon flower plant.  It worked, and caused the teenagers to notice the world around them.  “What is that weird smell?” they asked, but then we went out for ice cream and they didn’t notice it any more.

Today I sprayed the Liquid Fence, and there was no breeze, hallelujah.  I went and sprayed the balloon flower plant just for good measure.  Now I have high hopes for no more vertigo and for the birth of gladiolus flowers.  Perhaps I’ll name them Prince George.

It’s been a fairly hectic week for this Sandwich Generation mom.  I drove to Baltimore on Wednesday to pick up Youngest Daughter.  There were no hotel rooms available, so I stayed with my Mom. I also visited my aunt.  It’s just a different world at the retirement home, and that is all I can say about that right now.  A bright part of the trip was visiting with my older brother, who happened to be there.  I don’t get to see him very often.

Baltimore is a tropical rainforest in the summer, with the occasional large and potentially squishy toad sitting on the sidewalk.  It was damned hot.

I drove home the next morning with Youngest Daughter, which meant that I stayed less than 24 hours in Baltimore.  One good thing about being the only driver is that I got to decide when to stop to use the bathroom.  That’s a crucial thing when the driver is using excessive soda=caffeine consumption to stay alert.

The other good thing about the drive was the chance to have a good long chat with my daughter.  Our topics included Nazism, how to argue, political stability, the Natural History museum, why communism doesn’t work, annoying human behaviors, whether we should stop to buy a pie (no), the ancient history of Russia, and what Dad would do if I spilled my soda all over his car.  Once upon a time, I would have been qualified to pontificate on these topics, but that is no longer true.  I told YD to read books about these things, but she wanted my view.  I guess that’s part of being a mother.

Once I got home, my driving duties continued: YD to marching band practice; me to the grocery store.  By 9:30 p.m., though, I was in my pajamas and truly exhausted.

As I headed upstairs to bed, I saw that the outside front light was on.  Thinking that one of the kids might be out in the yard, I opened the door and shouted, “Is anybody out there?”  No answer.  So I closed the door, locked it, and turned out the light.  Bedtime at last.

About 10 minutes later the doorbell rang, followed by loud banging on the door.  My husband and I stumbled to the front door, thinking that it could be the same policeman who, last week, rang the doorbell at midnight to tell us that the car lights were on (left on by Oldest Daughter).  But no, this time it was Oldest Daughter herself.  She was furious at being locked out.  She said, “It’s NINE THIRTY!   WHO goes to BED at NINE THIRTY?!  And how could you LOCK ME OUT?!”

To which I should have replied, “Who goes for a walk in the dark?  Who doesn’t tell anybody that she has gone out?  Who doesn’t take her house key with her?”