I first learned about lift at the Smithsonian Air and Space Museum, on a date with a man who, being a biologist, knew as much about lift as I did.  I later married that biologist, so naturally I associate lift with good things.

As this non-physicist understands it, lift is a feat of physics requiring a curved shape of wing and speed.  The air pressure over the wing becomes less than the air pressure under the wing, and this lifts the wing up.  I find it to be an amazing concept, and even more amazing to experience it. Of course, it does require forward motion at a fairly terrifying speed.

I experienced lift because I went on a business trip.  It was a surgical strike on Chicago – in one day and out the next – for a 3 hour meeting.  This was the first time in three years I had traveled by air.  I didn’t think it was possible, but airline travel is even more annoying than it was three years ago.  Going through security is a demeaning process involving removing crucial items of clothing – coats, shoes, and – a particularly embarrassing requirement especially for men – belts.  In this state of humiliation, you must put these items in a bin.  And do it quickly, because the person behind you is wondering why you are so hopelessly slow.

After this partial disrobing, I was pulled aside for a full body scan.  Perhaps I look like a ter*ror*ist.  My husband said later that maybe it looked like I had a suicide jacket on under my coat.  I told him that I wasn’t wearing a coat - I had already put my coat in the Bin of Humiliation.  Perhaps they mistook my rolls of fat for a weapon.  “Put your feet on those squares, ma’am.”  “Put your hands over your eyes, ma’am, and raise your elbows.”  I realized a few seconds later that this was not to shield my eyes, but so the full body scan could get a good look at me all around, if you know what I mean.  So I posed for intimate pictures of my body in an extremely public place.  I wonder if they store those pictures somewhere.  They might be useful in a horror film.

After all that, I was glad to sit down and wait, and then finally get on the plane and experience that lift.  It thrills me every time when the wheels leave the ground and we begin to soar above God’s good earth.  The trees looked cozy in their red, brown, and burnt sienna hues.  There was an uplifting moment when the flight attendants served us what they called “breakfast peanuts.” 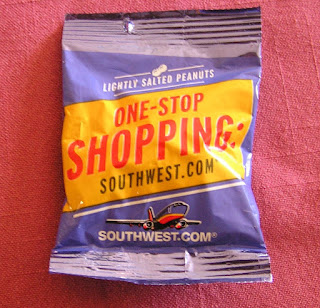 I have to say, though, that the best “lift” I got was when I arrived back home and saw my family.  Because for the Common Household Mom, one day is a long time to be away from home.

Bean Counters of the World, Unite!

By profession, I am, in essence, a bean counter.  My job is to use statistical methods to predict how many soybeans (and other crops) will be produced.  I celebrate my world day with these 5 thoughts about statistics.

3.  Statistics are important.  For instance, when my mother-in-law reported to us that her blood pressure measured at 400 over 70, we needed to compare that to statistics of the usual range of blood pressure measurements.  We concluded that she was inflating her systolic pressure by a factor of about 4.  At 400/70 her head would have popped off.  Never fear, her head is still on.

There are other statistics that are important in families.  The parent’s favorite statistical question is, “How many times do I have to tell you to hang your coat up?”

3.  Some things are hard to count, but it’s important to try anyway.
- How do you count the number of homeless people in your community?  Many of them are not living on the street, but are staying with Uncle Joe.

- How do you count the number of hungry people in a community?  Set up a food bank, and then go count them again to see if your food bank is effective.

- How many people are there who profess faith in Jesus Christ, and are in an interfaith marriage with a Jew, in which both partners practice their religions and are actively involved in their faith communities?  The answer is: not very many.  One of them is me.

4.   Statistics is biblical.
Starting with the fact that one of the books of the Bible is named “Numbers,” many chapters of the Bible are devoted to the taking of censuses.   There is also counting the spoils of war (the spoils being sheep and goats) so they can be divvied up among the victors (Numbers 31).  David takes a census without God’s approval, and everybody suffers (1 Chronicles 21).  Perhaps my favorite biblical statistic is found in the gospel of John 21:11 – “So Simon Peter went aboard and hauled the net ashore, full of large fish, a hundred fifty-three of them; and though there were so many, the net was not torn.”

5.  Probability (used closely in conjunction with statistics) is useful in everyday life.
For example, I sent an e-mail to my husband and kids detailing my plan to work out the complicated logistics we were facing a few days later, with debate team practice, marching band rehearsal, swallowing of dinner, a football game, and a string orchestra gig.  I concluded my e-mail with the question “Does that seem like it will work?”  My son wrote back:
“There is a 40% chance of it working, a 10% chance of it not working, and a 50% chance of it only working for one person.”

And there is a 100% chance that the one person it works for is not Mom.

Posted by Common Household Mom at 8:54 AM 3 comments:

Although our family enjoys music, singing is banned at the dinner table.  Otherwise we might find ourselves living in a perpetual opera, with every line sung rather than spoken.
Sometimes the rule is ignored. One evening in August the Common Household Daughters provided dinner entertainment by singing the word “ectoplasm” to the tune of Handel’s “Hallelujah Chorus.”
For our Friday night dinners, we use Jewish Sabbath blessings.  These blessings can be sung, and so we do, except for the blessing for lighting the candles, which we don’t seem to agree on the tune for.  But there is No Singing After the Blessings.
The Youngest Daughter, when asked to say the blessing before dinner, often puts her prayer into song, including a little scat singing for good effect:
“Dear Lord, thank you for this food-dee-dood-deeda-dee, even though there is nothing on the table that I like to eat, and thank you for all of us, swaba-daba dooba, and thank you for all-la-la-la-la the things we have to be thankful for.”
Singing nonsense syllables is actually a quite acceptable form of prayer in Judaism, called niggun.  It often makes this Presbyterian uncomfortable when we are at synagogue and sing “bim, bam, bim-bim-bim-bam” or “lei, lei, lei”, but Presbyterians ought to get out of their wordy heads sometimes and just sing some of that na-na-na-nee-nonsense.
The idea behind a niggun is that words cannot fully express our prayers.  Plus, nonsense syllables make it possible for all to participate, even the youngest child.  After all, as Paul says in Romans 8:26, “we do not know how to pray as we ought, but that very Spirit intercedes with sighs too deep for words.”  Maybe the prayers without words are the most heartfelt prayers.
Here's an example of a niggun.  It is not in a worship setting, but you can get the idea after a few seconds of listening.
Posted by Common Household Mom at 5:07 PM 2 comments:

Today is our 20th wedding anniversary!  We are celebrating this evening by
1) having leftovers for dinner
2) me taking my Son to his piano lesson and then dashing over to parents’ night at one high school and
3) the Common Household Husband going to hear a college rep at the other high school.
Oh, sob, we will be apart!  But on Sunday.... Oh, on Sunday! We are all going out to the most delicious brunch that this town has to offer!  Because we love food!
The traditional gift for the 20th year of marriage is china.  Well, I did go buy four Corelle dinner-plates, because I left some of our set at my mother-in-law’s.  I think Corelle is a great symbol of our marriage – not fancy, but really unbreakable. Plus plates have to do with food, which seems pretty central to our lives.
In choosing a gift, I decided to go in a different direction.  Here is my anniversary gift to us as a married couple: 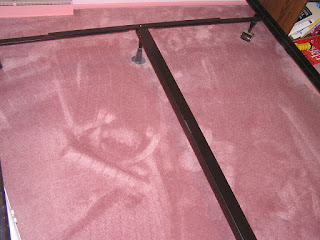 Yes, my gift to us is that I vacuumed up the dust underneath our bed.  Because my allergies were driving me crazy, and there was about 20 years of dust under there.


But wait, there’s more!  All by myself, I also flipped the mattress.  Folks, I do not recommend that you do this by yourself.  It was probably the third stupidest thing I have ever tried to do by myself.  A miracle occurred: I managed to do it without breaking any light fixtures or my back. (In this candid photo, you can see some of the dust that was under the bed.  It was worse than that in some spots.) 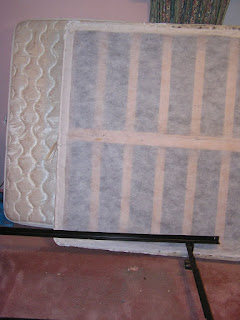 My friend, who is a psychiatrist, phoned while I was doing this onerous task.  When I mentioned what I was doing, she talked me through the three “Ps” which prevent most people from de-cluttering:  Passivity, Procrastination, and Perfectionism.  So while I talked to her (procrastination), I lay on the bed (passivity), and looked at my cluttered closet which I knew I could not tackle right then, despite my best intentions (perfectionism).  My friend brilliantly helped me get the three Ps out of the way. She said, “Set a timer for one hour, and after one hour stop cleaning and declare yourself done for the day.”  And that’s what I did. 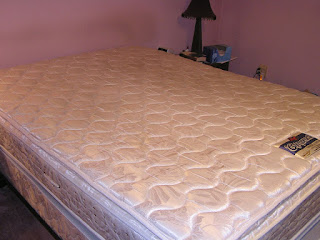