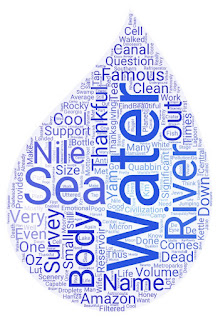 The family mentioned the Nile River, the Dead Sea, and the human body several times.

Name a body of water (of any size) for which you are thankful.

A.  The Quabbin Reservoir.

B. Rocky River because it provides beautiful scenery in our metroparks and I have walked there many times.

C. The water in my 32 oz emotional support water bottle

E. I am very thankful for small droplets of water 1 micron in volume, as they are the average volume of a cell and are thus very central to my work.

F. The water in the kettle from which I make my tea.

G. My own body, which is mostly water.

L.  The White River (good for jumping in)

Name a famous body of water, and why it is significant.

A.  The Okefenokee Swamp, in southern Georgia.

Because this is where Pogo famously uttered his anti-pollution motto, “We have met the enemy and he is us”.

B. Sea of Tranquility, which is where astronauts landed on the moon.

C. De Nile, because it’s not just a river

D. All famous bodies of water I know of already have names.

E. The Hamza river is really cool, even if it’s not as famous as the Amazon river, because it’s bigger than the Amazon and all underground! It even flows underneath the Amazon, 4 km down! If we could get down there, think of all the dinosaurs we could find!

F. The Dead Sea.  Also called the Sea of Death (Yām HaMāvet ים המוות),  The Sea of Salt (Yām HaMelaḥ ים המלח),  and the Sea of Lot (Birket Lut بحر لوط).   Swimming in it is a singular experience.  Once you have gone in it, you will not ever need to nor want to do that again.

G. The Nile River, significant for being the center of one of the world's oldest civilizations, as well as the first stage of grief.

H. The Nile river because it enabled one civilization to flourish. The Red Sea because it has fish and whales and is part of our origin story as Jews.

The Pacific, because it contains the islands of Hawaii.

J. The Dead Sea in Israel, because I got to go float in it, and that was pretty cool.

K. Sargasso Sea. It introduced me to Jane Eyre.

For the eleventieth year in a row, It's time for the Common Household time-honored tradition of the

1. Name a body of water (of any size) for which you are thankful.

2.  Name a famous body of water, and why it is significant.

Please participate by giving your answers in the comments.  Happy Thanksgiving Preparation Week!

As you can see, I could not pick one favorite photo for this topic.

Below are the first lines of the eight (!) books I finished reading in October. This is a stupendous number of books for me, caused by the confluence of needing to switch to children’s lit, and having two cross-country travel days.

Thomas Wazhashk removed his thermos from his armpit and set it on the steel desk alongside his scuffed briefcase.


Book 2
Hi, I’m Sadiq! My family and I live in Minnesota, but my parents are from Somalia.

“Force…equals…mass…times…acceleration,” muttered Ada as she wrote in her notebook. Ada pondered that if you drop a hammer on your foot, it hurts more than dropping, say, a sock on your foot. The acceleration, or speeding up, is the same, but the mass, the solid oomph of a thing, is different. Oomph times zoom equals kaboom!

The sofa wasn’t there on Monday but it was there on Tuesday. It sat in the shade just down the road from the bus stop.


Book 5
On Nov 4, 2008, when many world leaders waited to hear the results of the American presidential election, Italian prime minister Silvio Berlusconi was in his Roman residence preparing to have sex.

“Did!” Ada growled through gritted teeth. She shirred the black iron coal shovel down through the air at her sister.

Well’ let’s start with Elizabeth, shall we? And see where that gets us?


Book 8
Chapter One: The Lady in the Drawing Room

“Oh, dear, so you are! Wotever shalladoo!”


Did not finish
Just as Lucien Bernard rounded the corner at the rue la Boetie, a man running from the opposite direction almost collided with him. He came so close that Lucien could smell his cologne as he raced by.

This second reading was for book club. I found the book even better the second time around – I love the characters and the magical realism of this book. It also taught me about a piece of US history that every American should know. Highly recommend.

I desperately needed something short and light. I find that at bedtime I cannot read about French collaborators during the Nazi occupation (see “Did not finish” category). But it also seems that I cannot escape elections as a topic, because this book popped up near the top of the list as available from the library on kindle.

This was a fun children’s detective story, which puts together two girls from history who did not actually know each other in real life. Ada Byron (who became Ada Lovelace, known as the world’s first computer algorithm designer) and Mary Godwin (who became Mary Shelley, known as the world’s first science-fiction author). Other historical characters also appear, and there is a splendid hot-air balloon adventure.


Book 4
What We Found In The Sofa and How It Saved The World, by Henry Clark, Illustrated by Jeremy Holmes. 368 pages. Published 2013. This middle-reader book also features a wild hot-air balloon ride. This book is more sci-fi fantasy than the other kid’s book. Includes an A.I. couch, cloning, an evil alien, and shenanigans. 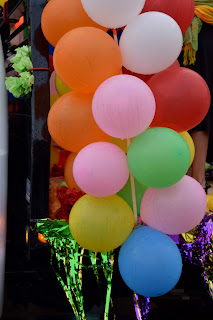 I don't have a photo of a hot-air-balloon.
But I do have this photo of wet balloons
during a marching band parade.
Book 5
Strongmen: Mussolini to the Present, by Ruth Ben-Ghiat. Published: November 10, 2020. Text 262 pages. With notes, index, etc, 358 pages.

Terrifying, but instructive. I had to gloss over some sections which were just too awful. Warning: this book contains graphic descriptions of violence, including sexual violence.

The book is a case study of some of the more well-known autocratic rulers of the 20th and 21st (so far) centuries, but is limited to those who came to power through elections or coups. There is nothing in this book about Stalin, Mao, Xi, or the Kims of North Korea, because they came to power in already-closed systems. It turns out Trump’s personality flaws are not a quirk but a feature of the “personalist”/ autocratic type ruler. Ben-Ghiat published this before the Jan 6, 2021 insurrection but does note that in general the strongman ruler will do just about anything to stay in power or return to power.


Book 6
The Case of the Girl in Grey: The Wollstonecraft Detective Agency Series, Book 2. By Jordan Stratford, illustrated by Kelly Murphy. Published 2016. 226 pages.

The Strongmen book was very difficult subject matter so I was happy to turn to the second in this children’s lit series (Grades 4-6). Starring Ada Lovelace and Mary Shelley as children. Contains harmless ghosts, graves, and doppelgangers.

I did not like the narration style at the start of the book, but the narration/viewpoint changed frequently. Oddly, those changes did not bother me. I was eventually drawn in by the setting, and then the characters and the humor. The Old Folks’ Home portrayed in the book closely resembles the place where my parents spent their last days. Except the one in the book had a cemetery, with extra bodies in it. I am not a good judge of whether the mystery and solution thereof are satisfactory to die-hard (!) murder mystery fans; all I can say is that I enjoyed the story a great deal. It was good book to read while experiencing jet lag that just makes one want to loll around in the hotel and read.

This book takes place and was written during World War II. I did not enjoy it quite as much as the 2nd book in the series. It includes a character who believes in judging a person’s character by the size and shape of the head – eugenics? – and that irked me. But it ends with a traditional couple falling in traditional love, so that’s okay to read while cooped up in an airplane for 4 hours.


Side note: If you get on an airplane departing from Texas, keep your face mask on. It was our last flight home after a wedding, and I was thinking I could take off my mask, but as soon as we took off, people starting coughing and kept it up for the entire 2.5 hour flight. My mask stayed on, and now, 6 days later, I am not sick.


Did not finish
The Paris Architect by Charles Belfoure. Published 2013. 400 pages.

For book club. A fictional exploration of the Nazi occupation of Paris, with particular attention given to French collaborators with the Nazis. I got about half-way through (after the scene with the fireplace), but this book was too fraught with peril for me to finish. And that’s too bad, because I think it is important to understand what it means to be a collaborator.

Posted by Common Household Mom at 8:45 AM 3 comments: