Survival of the Fittest

When life gives you frogs, make biblical references to plagues.

When life gives you toads, well, try not to step on them, lest you incur the wrath of teenaged girls.

A few days before we arrived on Friday last, the campus of the Old Folks’ Home was transformed into a giant maternity ward.   Many little toads came forth, born into the heat of late spring in Baltimore.

A few days after the Toad Birthing, as we walked from the car to the building where Grandpa lives now, we saw movements on the sidewalk, tiny jumping things. It was all we could do to avoid stepping on them.  They were no bigger than a centimeter in diameter.

I conjectured that the ones who would eventually survive would be the ones who figured out how to stay in the sidewalk cracks.  My husband said that the really smart toads were the ones we couldn’t see, because they were in the grass where nobody would step on them.  I decided to avoid walking in the grass.  Where there are toads, there may be snakes.  Maybe the toads on the sidewalk weren't so dumb after all.

Youngest and Oldest Daughter were delighted with the tiny amphibians, and dashed around trying to catch them. I was reminded of when Oldest Daughter was 8 and captured a toad and named it Genevieve and made a habitat for it in the back yard.  I hoped the girls would not try to do this in Grandma’s apartment, or at the hotel.  Son ignored them (both the girls and the amphibians).

Before we arrived, a Great Toad Massacre had already occurred.  We imagined the carnage wrought by the Old Folks’ motorized scooters, heedlessly plowing through baby toads.

After two days of Baltimore heat, we saw fewer toads.  Then there was a terrific thunderstorm.  Oh, happy toads!

The only other thing I know about these toads is that they are danged hard to take photos of.  I am not showing you my many photos of empty sidewalk.
Have you seen any interesting wildlife lately?  Do you know how to tell the difference between a frog and a toad?  I don't.

Gardening Before and After

On the weekend we bought this at the garden store. 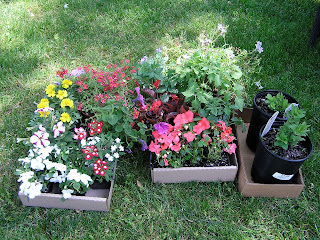 When we got it home, I had second thoughts about my ability to get all this planted, because in order to get it planted, I had to pull out gobs of weeds.

Three years ago, the top of the “hillside” looked like this: 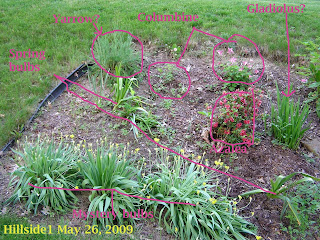 Last week, it looked like this.  The effects of a very warm spring, I guess.  I refuse to attribute this to the laziness of the gardener. 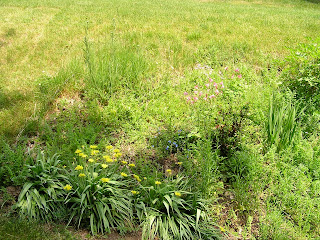 After working all afternoon in the blazing sun (sweating but not complaining), I had it looking like this. 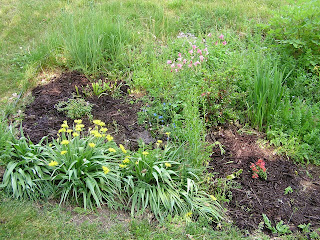 I planted more phlox, which has been known to grow in other areas of this hillside.  I’m in favor of planting things which will grow.  It’s hard to plant things here because the soil is so poor, and the land slopes.   I pound the shovel in, and likely as not I hit a rock.  There are also all those weeds, and the front and back door of the resident Angry Chipmunk and Snake to contend with.  So perennials are best in this area.  It's surgical strike gardening in this spot.

The forlorn-looking red flowers on the lower right came home without a label, but I think they are called rudbeckia.  Black-eyed susans?  These are not black-eyed.  As a science experiment, I planted one here in the part-shade, and another in full sun.

These yellow mystery flowers come back year after year.  I bought the bulbs at a preschool fundraiser.  We've been done with preschool for a long time, but the flowers live on! 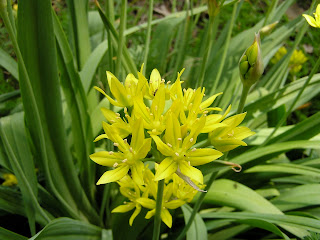 I also put in these impatiens, surrounding my husband’s hydrangea stick of blessed memory.  In a fit of unjustified hopefulness, I planted the hydrangea stick deeper, rather than just pull it out.  The tall green stick serves as a marker.  We were going to get an actual hydrangea bush with actual leaves on it, but we had a big argument at the garden store about it, reached an impasse, and decided to wait another year. 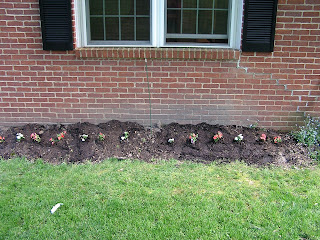 Now all we need is some rain.

What's growing in your garden these days?

Rejoice and Be Glad

Today was “Be Glad You Have a Deck” day in the Common Household.

For starters, the weather was gorgeous.  After dropping Youngest Daughter off at a bat mitzvah, the Husband and I headed to the Home Improvement store for mulch, deck stain and a toilet seat, because those things are necessary for our own daughter’s bat mitzvah.

People generally know that to chant Torah, the bat mitzvah student must spend years studying.  What people don’t know is that to prepare the Common Household for the bat mitzvah event, a jillion things need to be fixed.  We feel compelled to paint the front door, seal the deck, replace the toilet seat in the children’s bathroom, and weed the garden regularly.  Today was our day to start these tasks.

When we got home I said to my Son, “Here is your project.  Install this in your bathroom,” and pointed to the new toilet seat.  He looked at the picture on the box and said, “Why do we need a new toilet?”  I told him it was a toilet seat, not a toilet, but I did not stick around to hear his objections.  Of course, he paid no attention to his assignment, despite the fact that he has the Plumbing merit badge, and instead went back into his room.

I asked my husband if he wanted my help painting the deck.  He said, “It’s up to you. If you want to help, it would be fine with me.  But there is one rule.  No complaining.”   I accepted this supreme challenge because otherwise I would have to weed the hillside, and I am very afraid of weeding the hillside.

I put on my scungy clothes, and started brush-painting the top of the railings.  “It’s really sunny out here!”  I said, not complaining.  I sat down to paint some wood close to the wall of the house, and said cheerfully, “It’s too hot to sit down on the deck surface!”  It became clear that in order not to break the One Rule I would have to focus on the positives that would come from painting the deck with noxious substances:
- the deck won’t fall down as soon.
- fewer splinters.
- we can use the grill.
- moon-gazing from the deck on a summer night. Ahhh!
- we can entertain family after the bat mitzvah.
- the deck itself is a Developed World privilege.  Having the time and energy to paint it
means that we have adequate food, shelter and safety.
- we won’t have to do this again for two years.

As we progressed, I became further grateful.  My son has his driver’s license, so we sent him to buy new painting poles for the rollers when the old pole broke. I was grateful that last year’s sunscreen was still effective.

Tomorrow I must continue the bat mitzvah prep by weeding the garden.  But for today, I am grateful that we have a deck.  And even more grateful that we finished painting it.
Posted by Common Household Mom at 10:48 PM 3 comments:

If You Give a Scout a Shovel

If you give a Scout a shovel, 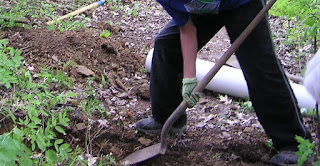 He’s going to want to dig a hole.

When he starts to dig the hole,
He’ll come upon a huge rock.

He’ll see that removing the rock will require a pickaxe. 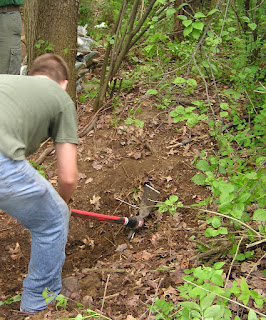 As he wields the pickaxe he’ll injure his wrist.
So he’ll ask for an ace bandage. 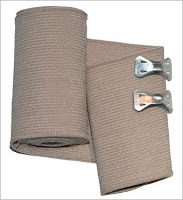 The Scout in charge of the project will send him up the hill to the first-aid box. 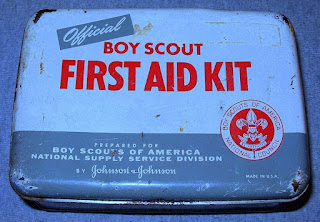 Just as he finishes putting on the ace bandage, the pizza will arrive. 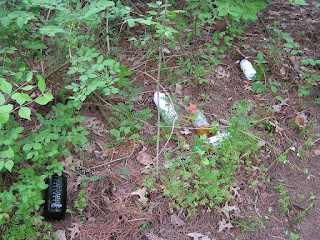 When he returns to the trail to dig, he’ll find that another Scout has finished digging and has put the 6-inch pipe in the hole. 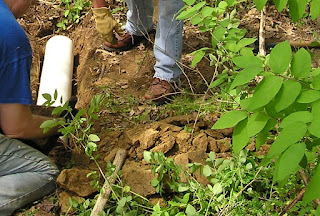 So he’ll want to spread some pea gravel and dirt over the pipe. 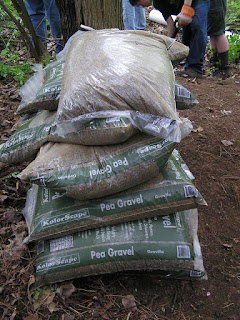 He’ll need a tool for moving the gravel and dirt.

So, he’ll ask for a shovel. 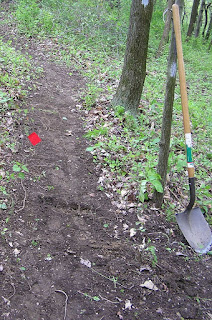 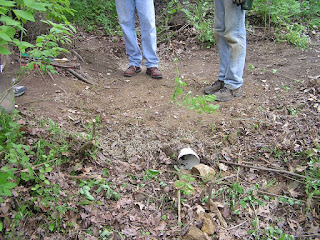 I bring you snippets of tonight's dinner conversation in the Common Household, before I move on to the evening's event.

Youngest Daughter decided to help herself to a bit of the contents of the extra bowl of icing by dipping her fork handle into the icing.

Son:  YD, you’re not supposed to use that end of the fork for the food.  That end is for holding the fork!

Me, secretly pleased that Son shows signs of recognizing uncivilized dinner behavior, but despairing about YD’s dinner behavior, speaking to my husband: When do you and I get to go out to dinner alone to a nice, fancy restaurant?

Husband:  Any time you want!

Son:  Hey.  If you’re going out to a restaurant alone, then I’m coming with you.

Son:  Dad, I have a math question for you.  How many cars does it take to drive two people to Collegetown?

Husband, suspicious:  Is this a trick question?  It depends on whether the two people are leaving at the same time from the same location... wait a minute.  Cars don’t drive.  People drive cars.

Me:  What he really means is, if the two people might not be returning from Collegetown at the same time...

Husband:  He didn’t say that!  There was no mention of returning.

Son:  What I really mean is, will there be a car for me to use on Friday evening so I can go to somebody’s Eagle Scout project, or are you taking both cars to Collegetown?

Husband:  Grandma’s got squirrels in her attic.

Son:  She must be going nuts.

Son:  The squirrels must know that.

Waiting for Me at Home

Just back from a business trip.  Happy to be home.

Business folk like to write in clipped sentences, leaving off the personal pronouns.  But we do not live in the era of telegrams anymore.  I prefer pronouns.  Don’t you?

When I arrived home, here is what I found waiting for me that wasn't here when I left.