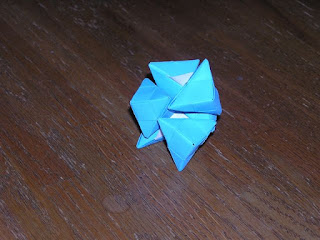 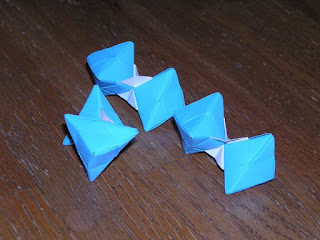 And, of course, hydrogen gas 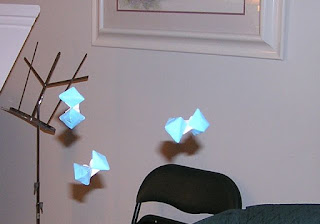 My brother and family came to visit, and I wanted to make a nice meal for them.  I thought I would expand my cooking repertoire by baking a ham.  I have never made ham before, because in a family that is 4/5 Jewish, it just isn’t on the radar.  We don’t keep kosher, but the family has a general suspicion of pork.  I once served pork chops and they looked at me as if I was trying to poison them.  My husband claims to hate ham, EXCEPT when it is ham on the bone cooked by my mother.  That particular ham he loves.

I mentioned to my son that I was planning to bake a ham, and he said, “But ham isn’t kosher.  And besides I don’t like ham at all.  What I like is those sausages we have at Boy Scout camp.”  (Irony alert! Those sausages are made of pork!)  Then I found out that one of our guests doesn’t like ham either.  Ham was beginning to look like a bad choice, and then my mother told me that “one definition of eternity is a ham and just two people to eat it.”  With two teenaged diners removed from the equation, we were getting closer to eternity.

I abandoned the ham plan and shifted to a lasagna attack.  But the Common Household Husband had other ideas.  “Lasagna is not your forte.”  This is true.  My husband’s nephew makes lasagna from scratch, every last ingredient, including the pasta.  My ingredients come from the box and the jar.  But at least the family does not view my lasagna with suspicion.

My husband said, “Where’s that cookbook I got you from Denmark?  How come you never use that cookbook?”  As he searched the cookbook shelf for it I said, “Because the main ingredient in those recipes is boiled juniper berries.”  This is partly true.

He couldn’t find the cookbook, and said, “That was a really nice cookbook.  I bet you threw it out.”  He knows I never throw anything out.  I pulled Delights of Scandinavian Cooking right off the shelf and handed it to him.  “How about this recipe,” he said excitedly, “Roast Haunch of Elk with Chanterelles!”  I am not making that up.  Other recipes in this cookbook include Eel in Beer Sauce, Reindeer Steak, and Fish Pie.  I am not making those up either.

I made lasagna.  It is gone, so I guess they liked it, and we haven't yet entered eternity.

Young children were ignored.  Laundry was left unfolded.  Dishes were abandoned in the sink.  School papers piled up on the table.  Why?  Because of the U.S. tax code.  Shhhh!  Mama’s doing the taxes.
Actually the Common Household Mom finished our federal tax return last month.  It was a hellish experience, requiring late-night sessions reading convoluted instructions to subtract line 6 from line 7 but only if greater than zero, and several calls to the IRS, only to find out that I knew more than the IRS representative.  My private language becomes uncommonly obscene during tax season.
Here are a few of the tidbits I gleaned from my late-night reading:
“Certain whaling captains may be able to deduct expenses paid in 2009 for Native Alaskan subsistence bowhead whale hunting activities.”  P. A-8
“Making Work Pay Credit: You may be able to take this credit if you have earned income from work.”  P. 47
The whole tax system is a welfare program for accountants.  I beg you, Accountants, have mercy, and lobby for a simpler U.S. tax code!  Income times percentage equals tax due.  You can even have a minimum income level below which no tax is due.  But mercy me, please do away with all the other calculations that require such ridiculous mental gymnastics.  And may God’s kingdom come on earth, Amen.
Preparing the federal return exhausted me so much that I put off the state and local taxes until last night.  There’s no time like the present.
Posted by Common Household Mom at 9:48 PM 1 comment:

Size of Balls Does Matter

A reflection from the first night of Passover

Every year at Passover, my mother-in-law complains that there is just too much food, the portions are too big, and everyone is eating too much.   Who can eat a mazto ball that big?  Just give me half.  Oy vey!  Why would anyone even MAKE a matzo ball that big?
So this year I decided to downsize the matzo balls in the soup.   I made them about 1 inch in diameter, which meant they were about 1.5 inches when cooked.  They were cute little matzo balls, and rightly sized for a meal with so many other courses.  In my humble goyische opinion.  So this evening we asked four questions, dipped twice, ate the Hillel sandwich, and exited Egypt and slavery.  Then, the most eagerly anticipated part of the seder: Shulchan Oreych – the meal is served!  First the gefilte fish.  Second course – the matzo ball soup.  I served my mother-in-law her soup first.  When it arrived in front of her, she looked at it like Snoopy looking at his empty dog dish.  A guffaw, and then a request for a little bigger knaidel.  The soup bowl is sent back to the kitchen, where the chef (me) adds another matzo ball.  Next year, in Jerusalem, with bigger matzo balls. 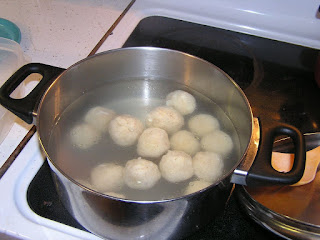