The Common Household Mom’s review of

I was perusing my college alumni magazine while brushing my teeth, and came across this sentence:

“In the century since its publication, James Joyce’s Ulysses has been described as beautiful, overrated, experimental, pornographic, dull, and genius.”

Aha! I thought.  All those adjectives could equally apply to American Gods by Neil Gaiman, the tome I was reading at that time, when not brushing my teeth.  I haven’t read Ulysses, so I don’t know how the two books truly compare.

American Gods was chosen by one of my book clubs, with the adjective “trippy” attached to it by the person recommending it.  American Gods proved trippy indeed.

Fantasy is not my preferred reading genre, and dark adult fantasy even less so.  I finished the book because I was fascinated with Gaiman’s take on America, and because I felt pride when I recognized a character as a god.  I did not overly enjoy this reading experience, but I keep thinking about the book.  Kind of like Wuthering Heights.

It’s a very American novel, in that the main characters spend most of the time driving everywhere, and acquiring and discarding vehicles. The car is king (almost a god!) in Neil Gaiman’s America.

It’s also a very dark novel.  The setting is invariably dirty, dingy, ugly, smelly.  There is not much pleasant in this America.  Even the agreeable, crime-free, clean town of Lakeside has an extremely dark underpinning.  The gods are, at best, amoral – the main character gods, anyway.  Shadow is the most morally upstanding of the characters.

I didn’t find much exploration of race, although many characters are non-white.  If I recall correctly, the first characters who are obviously gods are ones from European cultures (Norse, Celtic, and Slavic). And there are also the gods who were worshipped in American before white people came.  It seemed to me the only gods from Africa were Anansi and then a few Egyptian gods, but it could be that I failed to recognize some, because I am a white American and I have not learned much about the many distinct African cultures that exist. I would be curious to know if Gaiman fell into that pit of assuming one or two gods suffice to represent all of Africa.

I don’t know which culture the cat sex goddess is from, but I have to say, that was some scary pornographic text that I do not usually encounter in my reading.

As far as gods from Asian cultures, the only one I can recall, six weeks after finishing the book, is Ganesha.  Well, and that interlude story with the djinn - I was annoyed by that story because it didn’t have anything to do with the plot of the book and just added to my confusion.  Several times Gaiman inserts a little short story that is only tangentially related to the rest of the book.  The one with the djinn is the only one I can even vaguely remember.

Gaiman intentionally obscures some of the gods.  The prize of recognizing that a character was, in fact, a god, was a teeny dopamine hit that kept me reading.  The first thing that keyed me into this was the introduction of Czernobog.  I know some Russian, and recognized that the character’s name means “Black God.”  After that, I saw that the gods kept popping up everywhere.

The Common Household Husband was reading the book at the same time.  He kept asking me, “What does this book mean?”

Heck if I know.

What is Neil Gaiman saying about America and Americans? I am not sure, but here’s a stab at an answer:  Our gods are not the ones we say we worship.  In addition to bringing our up-front religions with us to the new world, white European people also brought all our folk gods and superstitions.  And people of color brought their gods. And there are also the gods who were worshipped in American before white people came.  We Americans carry around folk stories and superstitions from ancient times and faraway lands.

Then there are the “new” gods - gods of things, commerce, transport, money, and technology.  Mister Wood, Mister Stone, Mister Road, Mister Town, Mister World, and so on.  Out of all these gods, which ones do we really worship and adore?  Which ones are worthy of attention?  Which gods have the best outcome of people in mind, and which gods are only in it for themselves?  Perhaps Gaiman’s main point is to pose these questions.

Gaiman might be saying America is in a battle between the “old” gods of ancient tradition, and the new gods.  The way they are all portrayed in the book, I conclude that Gaiman feels none of them are worthy of our adoration.  Many of them are dishonest compassionless tricksters.

Shadow is very clearly a Jesus/Messiah figure, in that he makes a sacrifice.  Tied to a tree, enduring great pain, including the piercing of his side – classic crucifixion references.  He is resurrected by a woman (goddess/mythology figure) named Easter.  But does Shadow offer any kind of salvation?

Gaiman comes from a family heavily into the Church of Scientology.  I know nothing about that, so I can’t say how that works into the themes in the book.

Our kindle download was touted as the “author’s preferred version” which included 12,000 words not included in the first-published edition. I really want to know which parts of the book were axed by the editor for the first edition, but I was not able to find this info anywhere.  It seemed to me that editors exist in this world for a good reason, and this book was at least 12,000 words too long. But on the other hand it gave me a lot to think about. 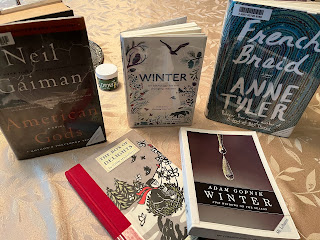 Below are the first lines of the books I finished reading in July.  This past month included a fun trip to Boston to visit family, a joyful event (our daughter's wedding), and then the inevitable aftermath: covid.

Book One: A Nice Little Family

Alexei Fyodorovich Karamazov was the third son of a landowner from our district, Fyodor Pavlovich Karamazov, well known in his own day (and still remembered among us) because of his dark and tragic death, which happened exactly thirteen years ago and which I shall speak of in its proper place.

This happened back in March of 2010, when the Philadelphia train station still had the kind of information board that clickety-clacked as the  various gate assignments rolled up.

You know the story of the Three Wise Men of the East, and how they traveled from far away to offer their gifts at the manger-cradle in Bethlehem.  But have you ever heard the story of the Other Wise Man, who also saw the star in its rising, and set out to follow it, yet did not arrive with his brethren in the presence of the young child Jesus?

Tom Langdon was a journalist, a globetrotting one, because it was in his blood to roam widely.  Where others saw only instability and fear in life, Tom felt graced by an embracing independence.

It’s hard to imagine modern life without the crossword.  The puzzle originated in 1913, and it soon became part of the fabric of daily existence.

I’d like to say something pithy about this book but I can’t because I just had covid.  And I read this in the BC period (Before Covid).  (I am now on Day 8, feeling much better, thank you, and tested negative.)

I first read The Brothers Karamazov when I was in high school, but not for a class, so I had no guidance to help me through.  The main thing I remember is that it was full of over-emotional characters.  The main phrase was:

Dmitri was always crying, that is, crying out. I believe it was the Constance Garnet translation.  When I read it 40+ years ago, I did not understand it well.

I thought maybe if I read it in a newer translation I might get better insights, so I bought this translation for my kindle in 2019.  I started reading it in April 2022. This new translation seems to bring forth the narrator’s voice - it’s got a sardonic tone to it.  The text seems to flow well, and the notes are helpful.  But it is still full of over-emotional characters.

The B.K. reminded me of Wuthering Heights.  It’s about one hugely messed up family who do terrible things to each other, and the characters’ names are fiendishly hard to keep track of.  Then add in a whole lot of musings about the Russian church and God and the devil, and you’ve got yourself a fine Russian classic.  At least there is Alyosha to give us all hope for humanity.

An example of a Dostoevskian sentence:

And at such moments he was glad that nearby, close at hand, maybe not in the same room but in the cottage, there was such a man, firm, devoted, not at all like himself, not depraved, who, though he saw all this depravity going on and knew all the secrets, still put up with it out of devotion, did not protest, and – above all – did not reproach him or threaten him with anything either in this age or in the age to come; and who would defend him if need be – from whom?

The story begins on the train from Philly to Baltimore, so I loved the book from the start.  It’s about a kind of flaky family, with children of such vastly different personalities that it is amazing the family can still be together, although they don’t see much of each other.  I read this for book club, and we concluded together that it is not the best Anne Tyler book, but I enjoyed it.

Part of my self-assigned “Winter reading in July”.  This was a charming tale, quite short.

Part of “Winter reading in July”.  I enjoyed this book – good characters, plot twists and turns, railroads, and a happy ending.