a) I make Brussels sprouts, despite my husband's claim that I "never" make them.  These were sauteed in bacon grease (oh, baby!), with garlic and salt, and topped with caramelized onions.  Please note that caramelized onions are served in heaven.  That is because, in part, they take an eternity to cook.

b) We had something besides pie to eat at Thanksgiving.  In fact, I like to start out our meal with forced salad.  Everyone gets served a salad, so we can at least fill a small corner of our stomachs with some healthy rabbit food.  My son won't eat salad, so he gets an apple.  After the salad, the cook & sous-chefs leap up and carve the turkey, finish the gravy, etc etc.

c) My brother, my kids, and their cousins love playing board games.  Settlers of Catan, anyone?

d)  I do decorate the house for Thanksgiving.  Minimally.

e)  I tried to remove some of the fat from the gravy, but there is no good way to do this, except to put the gravy in the fridge and wait until the next day.  That would not be a popular method to use on Thanksgiving day.

Posted by Common Household Mom at 10:00 AM 6 comments:

As if there weren't enough food already, the Oldest Daughter and her cousin made these treats on Friday.

On Thanksgiving Day, I asked my son to take some photos of our pies before we delved into them.  (It is one of the seven deadly sins, but we are proud of our pies around here.)  Here are the photos he took.

And here is a more normal photo of pies: 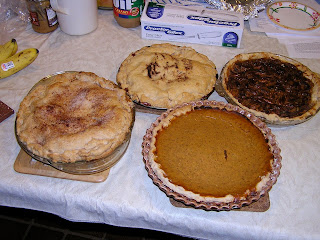 They were all very tasty.  There was enough for each of the nine of us to have pie for breakfast on Friday, and that is proof that there is good in the world.

Posted by Common Household Mom at 8:37 AM 3 comments:

Things That Are Done

I am done with…

With my husband out of action due to his Fractured Fibula, we are one Leaf Mover down in our household.  Getting these leaves up to the street took threatening to ground one 13-year-old girl if she didn’t rake, cajoling of one overly busy 17-year-old boy to mow the lawn, and no small effort on my part (and not just threatening and cajoling).

And then the leaf truck came (again) this week!  Oh, frabjous day!  And there was much rejoicing.

I now declare that the Common Household Lawn is clear of leaves, statistically speaking.  There is no significant difference between the number of leaves on the lawn, and zero leaves on the lawn (p < 0.10).
Never was there so much joy in retaining the null hypothesis!

That means I can turn my attention to other important matters.  Some other things I am done with are:

Remembering to take the turkey out of the freezer.  Some years I order a fresh turkey, which I prefer, but doing so requires some faith that the grocery store won’t screw up my order and make me be turkey-less. This year I went with cheap and easy, because I have too much else to think about.

Buying ingredients for green bean casserole.
But I might have to buy more fresh Brussels sprouts – will 40 be enough for the 8 people who eat these?  If I cook them in bacon grease will it increase demand?

Sewing the Eagle badge onto my son’s uniform.  It’s been 7 weeks since he got the badge, so it was about time.  While I was sewing, I wondered who sews on General Petraeus’s badges?  Oops, I guess that should be in past tense.

One thing I am not done with is giving thanks.  I have a lot to be thankful for.

So, dear reader, is there anything you can cross off your list?  Anything that is Done?

Here is the Common Household Pre-Thanksgiving survey.  It’s unscientific, so all can participate!

1.  Name one living person to whom you are not related and whom you do not know personally for whose existence you are grateful.

2. Extra Credit:  What is a Thanksgiving ritual that you remember fondly from your childhood?

Bonus:  Rewrite Sentence 1 without using the word ‘whom’.

On Thursday I stopped thinking about cleaning out the refrigerator, and started actually cleaning it.  Longtime readers of this blog will know that cleaning the refrigerator is an annual event in the Common Household.  For some reason, I am the only one in the house who participates in this important ritual.

Thursday I had managed to clean the top shelf of the fridge. Then it was time to make dinner - spinach and cheese quiche.  While I was sautéing the onions, I got a call from my credit card company, who said that my account was past due.  I checked, and sure enough, the bill sat in the usual bill pile, clearly labeled, “Pay by Nov 3.” For some reason my husband had paid the other bills, but ignored this one.  Grrr. I got the quiche in the oven, and took care of paying the bill.

This so taxed my brain that I absent-mindedly turned off the oven when the quiche was only halfway done cooking.  When I realized this, we had exactly 30 minutes before leaving for the piano lesson.  I fired up the oven again, and it turned out to be just enough time to get the quiche baked.

There was no time, though, to let it cool down on the counter. I had to snatch that quiche from the oven and immediately stick it in the fridge, since we would be away for the next 2 hours.  Holding the hot quiche with the oven mitts, I said to the kids in my emergency voice, “Open the refrigerator door so I can put this in there!”  As they opened it, the gleaming top shelf caught my eye, and I said to them, “Note the pristine condition of the top shelf of the refrigerator!”  I was very pleased with my work, and wanted it noticed.

Son looked, and said with horror, “Does ‘pristine’ mean ‘does not have enough food’?!”

Son pressed further.  “What did you do with all the food?  What are we going to eat?”

He does not know that a lot of that stuff in the fridge is just ‘filler’ like very old salad dressing, expired cottage cheese, and nearly-empty ketchup bottles, that make the fridge look full, but aren’t actually edible. Also, he does not like spinach quiche, even though it has his favorite food group, cheese, in it.  He was fearing for his next meal and all future meals.

Then this morning before anybody else was up, I worked on the fridge some more, finishing everything but the door, where the really interesting stuff lurks.  By about 10 AM, my husband hobbled downstairs.  After his breakfast, he said, “I guess I’m going to the casino for the tournament.”  He sounded rather glum, I think because he is just tired of dragging around a broken leg.

Me, with a heart of compassion:  You don’t have to go if you don’t want to.  You could just stay here.  I’ll be cleaning out the refrigerator door, doing the laundry, baking pumpkin muffins, and getting Youngest Daughter to rake the leaves.

Me, bristling at his 1950s viewpoint.  I mean, I just voted in an election to avoid the 1950s viewpoint, but here it is in my own house!:  And what about the wife when the husband is cleaning the house?

Husband:  The wife should be out of TOWN when the husband is cleaning.

My thoughts at this comment were not pristine thoughts.
Posted by Common Household Mom at 11:21 AM 4 comments:

Last Saturday, on the Pennsylvania turnpike Eastbound, we stopped at a rest stop. We noticed many people in bright yellow t-shirts and jackets.  I couldn’t really see what exactly it said on their jackets, but thought I caught the word “Disaster”.  On the back the shirts and jackets all said “Missouri.”

When we got back on the highway, we found out who these people were. There was a whole caravan of trucks of various sizes and shaped, all marked “Disaster Relief- Missouri” and “Southern Baptist Convention.”   One of the trucks was labeled, “Chainsaw Division” and another said “Shower Division.”  There was a truck towing what claimed to be a generator, and another large truck that said, ‘Bringing Showers of Blessings.”  Plus several more trucks that didn’t specify their exact purpose.

We guessed that these Missouri Baptists were headed to NJ/NYC with chainsaw skills, mobile shower units, at least one generator, and who knows what else (food and blankets?).  It looked organized, efficient, and hopeful.