A writing challenge:  How will people celebrate New Years 500 Years in the future?

The Common Household’s responses are below.  Feel free to participate with your own ideas.

Maybe you will have a more cheerful outlook than our expectations, which include the obesity epidemic normalized, nuclear war as celebration, and global warming bringing on new traditions.  What can I say? New Year’s is not my favorite holiday.  At least the United Federation of Planets plans on having a good time 500 years from now.

“Yeah, dude. I can’t believe we finally get to go this year!”

“I know.” Blobby belched and wiped a greasy hand on his mouth. “Where’s the rest of the pizzas?”

As if on cue, a harsh voice called from the other room “Don’t you go eating my pizzas! I’m saving a few for New Years!”

Blobby rolled his eyes. “Did you find the New Years Butter Balls?”

“Yeah, they’re all loaded into the cannon.”

“I call shooting them!”

“As long as you actually aim for my mouth this time.”

“You boys can’t shoot cannons until we go over to the neighbors and finish off their Root Beer Pool!” Burrita screeched.

Blobby and Fat Jones smiled at each other.

“I just love New Years Eve,” they said together.

Youngest Daughter wrote:
They will launch two huge nuclear bombs into the sky, send them onto their enemies, and then ooh and aah as their enemies are destroyed. Then, they’ll AAAAAH! as the nuclear radiation takes effect.  Then, they’ll go underground until the 4th of July.

Son wrote:
“Captain Picard, we need you at engineering.  And bring Data!  It’s an emergency, sir.”

Captain Picard tapped his communicator and replied, “Very well.  Data, come with me.”

In the elevator, Picard wondered what the problem could be.  “It’d better not be that metal-eating slime again,” he thought.  He stepped out of the elevator and approached the doors with trepidation. As they slid open, he heard a great clatter of pots and pans, and then the entire crew shouted, “Happy New Year, Captain!”

“But Ma, I hate jetting south to Newfoundland for New Year’s.  It’s so hot and swampy there.”

“Now, Optimus, you know it is the tradition to jet to the swamps, find 3-legged frogs, and throw them in the air for New Year’s.  There is no better way to celebrate the arbitrary passage of time.”

“But why does it have to be frogs?  Why can’t we throw something interesting like nuclear grenades?”

“Optimus, stop arguing and eat your recycled food pellet or we’ll be late.”

“Ma, who cares about the year 2512 anyway?  We might as well do something really bizarre, like bang a steel rod on one of those ancient cooking vessels, drink copious amounts of stupor-inducing substances, and sing schmaltzy songs at the top of our lungs.  At least that would be something new for a New Year’s celebration.”

Everyone knows that Jesus’ middle name begins with the letter H.  As in, “Jesus H. Christ, you tracked mud all over the house, and I’m having company over this afternoon!”  Or “Jesus H. Christ, why can’t Congress get something done?!”

I don’t know what that ‘H’ would stand for.   Holy?  Handsome? Heliotrope?

I’ve been taught that “Jesus” is English for the Greek for the Hebrew (Aramaic?) Yeshua, meaning “God saves us.”  But right now I’m thanking God that Jesus’ other name (although it seems no one actually called him by this name) is “Immanuel” = “God with us.”  It’s certainly more satisfying, in one’s anger, to say “Jesus H. Christ” than “Jesus I. Christ,” so maybe that’s why Immanuel never caught on.

This Advent I’m finding it very comforting to consider God with us.  Maybe that’s because I see that God does not save us from unpleasantness and difficulty, such as the decline in a loved one’s health, the stubbornness of a child getting bad grades because she refuses to take responsibility, or the machinations of Congress.  (The only thing that can be said about Congress is “Oy vey” with a sad shake of the head.)  Listing these difficulties that I face makes them seem petty, as I know that there are far greater difficulties in life than these.  I’m so grateful that God is with us as we struggle through these parts of life.   The idea that God is with me makes these things bearable.

Thanks, God, for Immanuel, God-with-us.
Posted by Common Household Mom at 8:39 AM 3 comments:

Hanukkah: the most low-key and most fattening holiday ever invented. 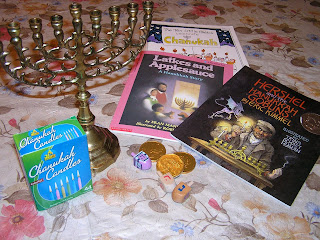 All the essentials, plus some of our favorite Hanukkah stories from past years. 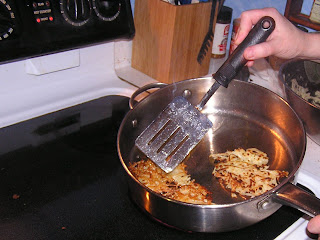 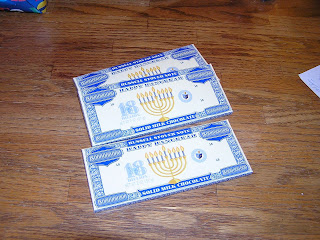 I found these in the grocery store - they were labeled "Santa Bucks".  Oh, well. 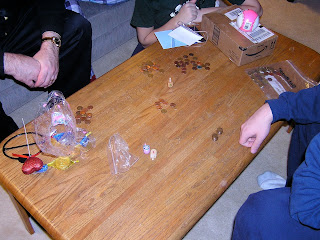 Dad lost the dreidel game.  The dreidel just would not land on gimel.

Gift Suggestions for the Budding Physicist

I have all kinds of thoughts brewing around in my head: how the “God with us” message of the Christmas story is more meaningful to me right now than the “God saves us” part of it; how I love Christmas cards but haven’t sent any yet; how music restores the soul; how I wish my printer were working properly (so that I could send the Christmas cards); and more.

But I can’t formulate those thoughts coherently right now, and of course, there’s no guarantee that they should appear here.  So instead I will give you this wordly discussion I had the other day, in the hopes that you, like my son, will see how to aim high in your requests.

My son and I were talking about toys.  He said, “The slinky, for instance, is very interesting.”

I said, “I find the slinky to be not so interesting.  It never works the way it is supposed to.”

He said, “The slinky is very interesting.  It demonstrates lots of physics principles.  You could get me one for Christmas.  Or... maybe you could get me an elevator!  That would be great for physics experiments.”

Me: “An elevator with a scale in it?”

Last night Youngest Daughter and I made Christmas cookies.  This was partly therapy for me, as I was still regretting my bad behavior on Friday night at the synagogue family dinner.  Sometimes I should just keep my mouth shut.  I should realize that I’m not the only one tired and stressed out.

Youngest Daughter also needed this cookie-making session.  The pangs of adolescence were sharp for her this past week.  We needed some calm Mother-Daughter time.

So we got in the kitchen and made a good mess.  She got creative and decided to meld the different cookie cutter shapes.  She used the 5-pointed star and the 6-pointed star together, and decorated them with red and green for Christmas and blue for Hanukkah.  “Look!  Christmas and Hanukkah are holding hands!”  She started singing one line of “The Twelve Days of Christmas” then a line from “Hanukkah, Oh Hanukkah, Come Light the Menorah,” alternating back and forth.  That drove me batty, but she was determined to sing through all 12 days of Christmas and all 8 nights of Hanukkah in that manner. 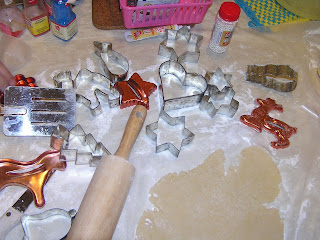 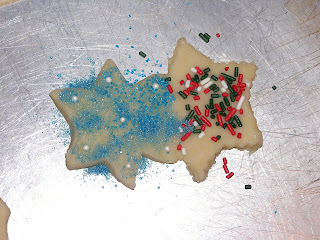 Then the cookie shapes got a little more bizarre.  She had the little-person shape melded to the bell, a tree with a reindeer head stuck to it, an angel flinging the little person around, and the front of the donkey with the back legs of the reindeer.  We got covered with flour, but we didn’t have to look presentable.  She took great care in decorating each cookie, but we had plenty of time.  When I was taking the reindeer cookie off the tray, I nearly severed its neck, but nobody was judging our baking skills. 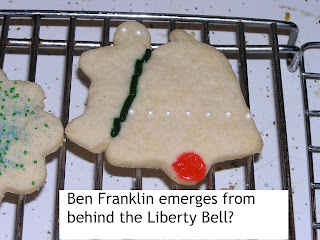 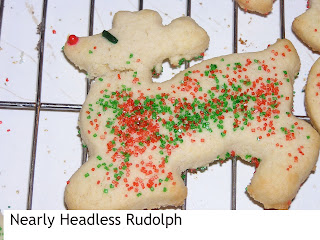 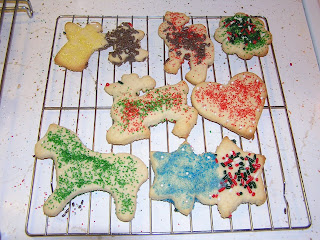