Which Would You Pick?

Where is the national outrage over the building of a gambling parlor less than ½ mile from national hallowed ground?
Developers want to build a casino ½ mile from the battleground at Gettysburg, Pennsylvania.  Over 400 people are scheduled to speak at the public hearing related to the development.  Some of them will probably speak against the proposal, but there is no outrage expressed at the national level.
What is the difference between a casino at Gettysburg and an Islamic center 2 blocks away from the site of the World Trade Center in New York City?
Why haven’t fearmongering national leaders come out in protest of the Gettysburg Casino Project?  Is it not insensitive to put a gambling establishment so close to the site of this heart-wrenching Civil War battle, surely hallowed ground for our nation?
I’d take the Islamic center over the casino any day.  Not that I am against gambling, per se, but the Islamic center would probably be smoke-free.  And it might have a swimming pool, and a quiet place to pray. I don't reckon you'll find either of those at a casino.
Posted by Common Household Mom at 10:53 PM 3 comments:

Taking it One Day at a Time

I am recommending to myself that I take things one day at a time. Otherwise I will fall apart just anticipating future events.
Today uncannily marks the following future events:
How on earth will I be prepared for those things?  I’d better go figure out what to have for dinner.  Tonight.  In 1 hour.
Posted by Common Household Mom at 5:01 PM 1 comment:

Signs Around the House

Are we the only family which posts signs around the house?  How effective are signs as a method of communication?

Here are some signs which members of the family have posted around the house:

Posted by the Common Household Son: 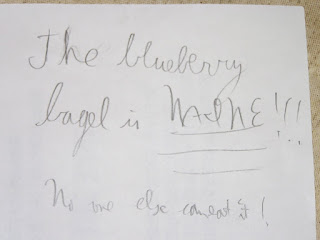 "The blueberry bagel is MINE!!! No one else can eat it!
Posted by Oldest Daughter, on her bedroom door: 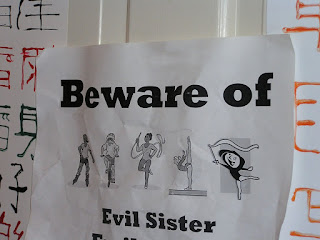 "Beware of Evil Sister," accompanied by drawings of girls in happy and harmless athletic activities.
Posted by Me, on various days during the winter.  I put the sign up on the bathroom mirror, and then the kids can see it when they get up, and then they'll know they can go back to bed.  For some reason, my son likes to save these.  Note my futile attempt to ask for help shoveling the driveway on Feb 10.  On that day, it had been snowing for 2 days straight.  Or maybe three. I have pushed it out of my mind. 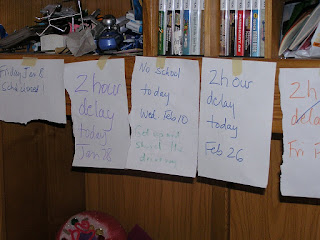 "Friday Jan 8 School closed!" (written when a school closing was all new and fresh to us. Notice how the signs after that do not have any exclamation point.)
"2 hour delay today Jan 28"
"No school today Wed. Feb 10 - Get up and shovel the driveway"
"2 hour delay today Feb 26"
etc etc etc
Posted by Youngest Daughter, on her bedroom door: 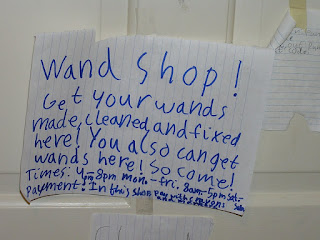 "Wand Shop!
Get your wands  made, cleaned and fixed here!
You also can get wands here!  So come!
Time:  4 pm - 8 pm Mon-Fri
8 am - 5 pm Sat-Sun
Payment: In this shop, pay with crayons and markers"
There are more, but I will post them at a later date.
Posted by Common Household Mom at 10:08 PM 2 comments:

Any Bags to Check, Ma'am?

We finished our study of The Acts of the Apostles on Friday.  Someone in our group asked whether the wives of the disciples, whose travels are described in Acts (Paul, Luke, Peter, etc), went along on the missionary trips.   The Bible doesn’t say much about wives going along, or how many suitcases the wives brought.  I conjecture that wives did go on the missionary trips.  Because really, how else did the disciple dudes manage to get where they intended to go?  The wives had to be along to ask for directions.

And maybe the wives came along to provide food during the travels.  Not that the disciples couldn’t fend for themselves, but maybe with the wives along the disciple dudes wouldn’t be tempted by the questionable hot dog stand on the corner.  When I was a girl our family travelled to Mexico.  My mother brought a suitcase containing peanut butter, jelly, and crackers.  That was my favorite piece of luggage.  We sat at the base of the pyramids at Teotihuacan and had lunch from that suitcase.  It was the most memorable pbj I ever ate, and a safe meal for us.

There is at least one case of a husband-and-wife missionary team. In Acts 18:1-3, Paul meets Aquila and his wife Priscilla.  Paul stays with them in Corinth, and in Acts 18:18 they all move on to Syria.  (In verse 19 Paul gets a haircut, but “Hairstyles of the Bible” is a discussion for a different day.  We could ask, though, if Paul’s wife begged him to get it trimmed before the next trip.)

Peter was married.  We know this because the Bible talks about his mother-in-law in Matthew 8:14.  Should we also ask if the disciple dudes had to put up with their mothers-in-law while traveling? That is beyond the scope of this study, and is a rather scary idea anyway.

In 1 Corinthians 9:5 Paul refers to wives of other apostles coming along on their travels.  Paul is talking about criticisms against him, and complains, “Don't we have the right to take a believing wife along with us, as do the other apostles and the Lord's brothers and Cephas?”  So there it is: the other apostles have been bringing their wives along.  But then in verse 15, Paul says, “But I have not used any of these rights.”

Maybe women/wives aren’t readily mentioned in the Bible because in that era women were not considered full legal persons.  Just a guess.  In the Bible men get top billing most of the time, which makes us all the more eager to know what it was like for women back then.

Other circumstantial evidence is found in Acts 23:23.  The commander of the Roman troops in Jerusalem has ordered his centurions to take his prisoner Paul to Caesarea.  Apparently this trip to transport one prisoner required “two hundred soldiers, seventy horsemen, and two hundred spearmen.”  Granted, Paul’s life was being threatened by forty guys who had agreed not to eat or drink until they killed Paul.  But does it take that many soldiers to protect one guy against hungry marauders?  Rather, the large number of soldiers and horses were required to carry the women’s luggage.   Including, perhaps, the peanut-butter-and-jelly suitcase.  And a map.

Jambowocky
“And, hast thou returned from the Jamboree?
Come to my arms, my beamish boy!
O frabjous day! Callooh! Callay!”
I chortle in my joy.
Posted by Common Household Mom at 9:47 PM No comments:

Waiting for a Miracle

I am wondering what it was like in the Olden Days.  My children think that the Olden Days were the 1960s, way back before there were cell phones or cable TV.

But I am thinking back to when there were no phones at all, and people communicated across long distances by asking someone to carry a letter personally.  Or they just showed up.  It would have been impossible to call ahead to ask if you could visit.  It must have seemed like a miracle when, for instance, your favorite nephew who lived three states away showed up at your doorstep, and luckily just at harvest time. Or the unmarried daughter you had to leave behind in, say, Cleveland, while you went out west to Colorado, showed up one day with her husband and 2-year-old child.

I don’t want to overdo it here, but when my son returns home from the Jamboree after being incommunicado for a full ten days (7 days so far, 3 to go), I will view it as a miracle.  Before he left, in my foolishness, I told him I was not expecting a phone call from him, but it would be nice if he did call once or twice.  Since he’s a teenage boy, he heard the first part, but not the rest.

All I know is, my son is somewhere in this crowd of 70,000 people.  Can you spot him?  He’s wearing a scout uniform with a white cap. 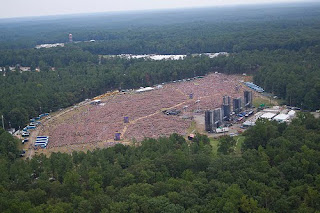 If you see him, be sure to tell him that I am sitting in the dark with no one to talk to, waiting for him to call.  You don’t have to sob when you tell him that.
Maybe that makes me the first Presbyterian Jewish mother.
I’m not fearful for his safety, but I just want to know what he's been doing; if he’s having fun, if he got to try the robotics stuff, and if he changed his socks yet.
And yet, if I could talk to him, this is the way the conversation would go:
What have you been doing?!
- Stuff.
Are you having fun?!
-Idunno.
Did you get to try the robotics stuff?!
-Maybe.
Did you change your socks yet?!
- Mom.
Even when he gets home, if we get any more information than that, it will be a miracle.  I am eagerly awaiting that miracle.
Posted by Common Household Mom at 9:22 PM 2 comments: