Here is the turkey that my brother brought for Thanksgiving. 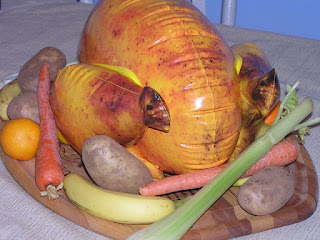 If we had eaten that turkey and its stuffing, we would have been excused from Jazzercize class yesterday.

I have more to say about Thanksgiving, but it’s time to move on.  No lolling about in the Common Household, because the next holiday is upon us – Chanukah starts tomorrow night!

What does this mean?  First of all, it means more food, of course.  Not having fully recovered from the carbohydrate- and fat-laden Thanksgiving table, we forge ahead to the potato latkes which await us.  Well, they don’t await us; we have to make them.  This year we will not be making Boy Scout Latkes, but will go for the traditional recipe, partly because we have 9 pounds of potatoes to use up.

Latkes are served with applesauce, but don’t let that fool you into thinking that they are low-fat.  The reason latkes are traditional at Chanukah is because of the OIL.  Most Jewish holidays are designed to remind us of a previous holy event.  (I guess that’s true for Christian holidays, too.) The oil for the latkes reminds us of the holy oil for the menorah in the Original Temple in Jerusalem.   Anybody who wants to hear more on why oil was so important should speak up in the comments, and I’d be happy to explain.

After focusing on latkes, we had better revert to more inflatable turkey (very low in calories) and Jazzercize.


Common Household Potato Latkes
Takes about 15 minutes to mix; about 1 hour to cook the entire batch.
Makes about 40-50 3-inch latkes

Get ready for finished latkes by putting paper towel out on plate.

Make the pancakes small (about 3 inches diameter) and flatten them out when you put them in the frying pan.    Fry in oil until brown.  Remove from frying pan and place on paper towel in a single layer.

Add oil to pan as needed.  It probably uses a total of 1 cup of oil. 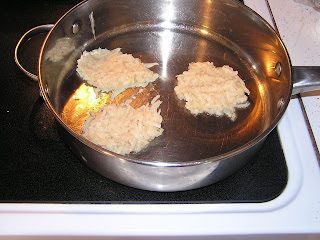 Tonight I made an advance attack on Thanksgiving meal prep.  There is already an arsenal of pies (one apple, one apple & raisin) in the freezer.  Tonight’s task was to make the green bean casserole.

Some of you have had your gravy made and frozen since the first frost back in October.  That is excellent Original Pioneer Suburban Housewife planning! You should give yourselves pats on your backs. But this is as far in advance as the Common Household Mom can cook.  Anything done ahead of time is in great risk of being eaten before the big feast.

It was a surprise, the first time we hosted Thanksgiving at our house, to find that the Common Household Husband feels that it just isn’t Thanksgiving without Green Bean Casserole.  He had politely done without it, for lo all those Thanksgivings, since he wasn’t the host.  I have usually looked askance at serving anything that comes from a can at a fancy meal.   I could just imagine the Joy of Cooking recipe for this culinary delight:  “Read: About Opening Cans, p. 246.” 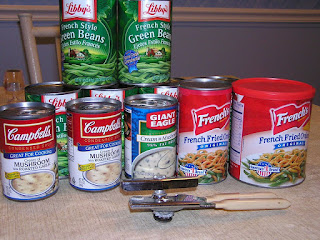 Once I saw how my husband’s eyes lit up at the thought of two cans of green beans, one can of cream of mushroom soup and one can of petrified French fried onions, I knew that we had to serve this dish.  It was very popular the first time, and every time thereafter.  It is also the easiest Thanksgiving recipe ever invented. So much for scoffing at cans.  I am converted.   I no longer use Joy of Cooking either.  It requires too much advance reading.

But I will also honor my personal tradition of serving fresh vegetables.  In addition to green bean casserole, we will also be having caramelized Brussels sprouts and roasted root vegetables (yams, carrots, and onions).

What kind of vegetables will you be serving this Thanksgiving?


Note: You can make this ahead of time, but in that case don’t put the onions on top until the last 5 minutes of reheating.


Psst.  I make it with skim milk and lower fat soup.  Shhh. 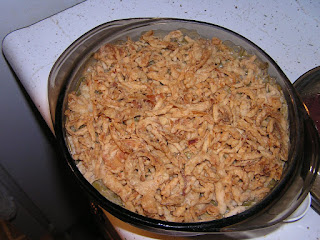 On Saturday I spent two hours cleaning out the refrigerator.  This was partly to escape testosterone.  That morning I went over to church to help at the semi-annual work day, where we all pitch in to clean up the church campus.  I brought my rake and work gloves.  But when I got there the place was crawling with Cub Scouts and men armed with leaf blowers.  The noise was unbearable, and my rake was not infused with enough testosterone to be effective.

So I told everyone I had to go home and clean my refrigerator.  When you tell people at church you are going to do a particular thing, you had probably better make it turn into the truth.  The truth is that cleaning the refrigerator was already on my list of things to do.  It is an annual ritual I perform as part of my preparations for Thanksgiving.  The problem is that there are still 7 days left for it to get dirty and filled up with toxic leftovers.

In honor of all the people who work hard to make Thanksgiving gatherings possible, I post this Note of Permission.  It was issued by Youngest Daughter in July, but I keep it posted on the refrigerator to remind me that someday it might actually come true. 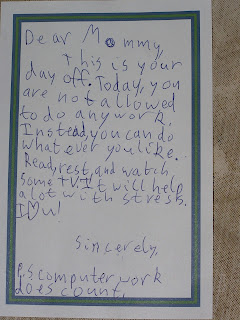 It reads, “Dear Mommy,
This is your day off.  Today, you are not allowed to do any work.  Instead, you can do whatever you like.  Read, rest, and watch some TV.  It will help a lot with stress.  I heart u!  Sincerely, Youngest Daughter.  P.S.  Computer work does count.”
So, Dear Reader, go sit down.  Relax. Read a book.  Watch TV.  Ignore the yard filling up with leaves, the fridge filling up with leftovers, and the laundry baskets filling up with clothes.  Take a pre-holiday Sabbath.  It might be the last chance you get to sit down for a while.
Posted by Common Household Mom at 2:27 PM 3 comments:

Thanks for One Last Pie 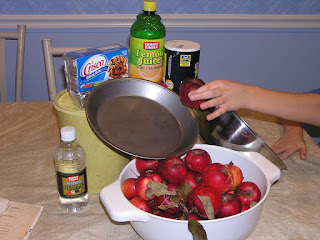 This year one of the things we will give thanks for is the final fruit of our apple tree (may it compost in peace).  Today Youngest Daughter and I made a pie out of the last apples I managed to pick from the tree before it was put out of its misery.  My niece has accused me of being a murderer for having this tree cut down.  On Thanksgiving I will offer her a piece of this pie as repentance. 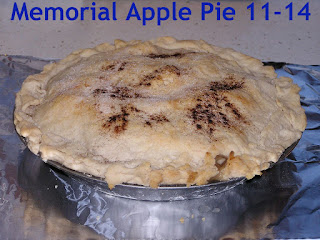 And as a final tribute, I offer this living art:  The Common Household Husband as Apple Tree, posing on the very spot where the dear tree itself once stood.  What are your thoughts about Thanksgiving? 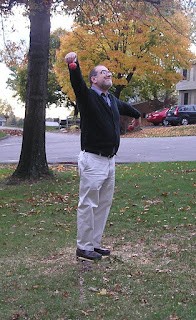 Dear Mr. Chemistry Teacher,
Thank you for the inspiring pre-Halloween demonstrations you gave to your chemistry classes last week.  My son told me that you showed how to make flames come out of the eyes of a jack-o-lantern, and you also set the top of the desk on fire.  My son was so impressed that he decided to try the flaming jack-o-lantern feat himself.  We were visiting my brothers (his uncles) who were happy to egg him on in pursuit of this goal.
I was relieved when my son said that he planned to use ordinary all-purpose flour, rather than flash powder which you used in your demonstration.
He carved a traditional scary face into his pumpkin.  Then he looked for a candle to put inside the jack-o-lantern.  A tea light proved to be too small, so his uncle took a thicker, fancier candle (belonging to his wife, who was not around) and sliced it in half so that it would be the correct height.  Next was the search for an appropriate tube to blow air through. A straw didn’t work, but a turkey baster promised to do the trick.
Next my son needed a fire-proof shallow dish to put the flour in.  First he tried a metal cup.  After numerous unsuccessful trials, which blew flour all over the inside of the pumpkin and repeatedly blew out the candle, he determined that edge of the cup was too high.  So his uncle then supplied him with a small paper plate to put the flour on.  This is the same uncle who, when he goes hiking and encounters a sign saying “Danger – Path Closed – Turn Back Now” goes right on ahead down the path.
After my son achieved the right conditions – success!  Man, those flames shooting out of that pumpkin were impressive!  It was very exciting to see a home-made science demonstration work right before our eyes.  We put the pumpkin on the front porch, and after a few more fiery demonstrations, my son went off trick-or-treating, leaving the candle lit inside his pumpkin.  I stayed home with his aunt to hand out candy.  She did not seem to miss her fancy candle.
After a while we noticed that if we kept the front door open any length of time, the smoke from the pumpkin would set off the smoke alarm inside the house.  So we closed the door.  Soon after that, the doorbell rang.  I opened the door to see a large group of costumed preschool-aged kids and their mothers. I expected to hear “trick or treat” but instead, one of the mothers said, in a calm voice, “Your pumpkin is on fire.  I think you need some water.”  I looked down and saw flames shooting out of the pumpkin, even without any turkey baster action on the flour.  I took the lid off the pumpkin, looked in, and saw that the paper plate and flour-coated insides of the pumpkin were fully ablaze.  I quickly got some water and dumped it in the pumpkin.
Our next science lesson here at home will be to review the meaning of “fire-proof.”  I just wanted to thank you for providing a very extra-exciting Halloween for us, and for continuing to make science an interesting school subject.  However, if my son decides to replicate the light-the-desk-on-fire demonstration, I think I will encourage him to do that at school.
Sincerely,
The Common Household Mom
Posted by Common Household Mom at 10:41 PM 1 comment: