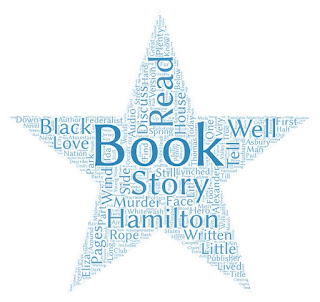 Below are the first lines of the 6 books I finished reading in March.

For Thomas Williams, it was better to be no one than someone in Asbury Park.

Williams lived in a city that was not meant for him.  It was designed as a haven for godly and wealthy white people.

The Mole had been working very hard all the morning, spring-cleaning his little home.  First with brooms, then with dusters; then on ladders and steps and chairs, with a brush and a pail of whitewash; till he had dust in his throat and eyes, and splashes of whitewash all over his black fur, and an aching back and weary arms.  Spring was moving in the air above and in the earth below and around him, penetrating even his dark and lowly little house with its spirit of divine discontent and longing.

The promise of liberty is not written in blood or engraved in stone; it’s embroidered into the fabric of our nation. And so is Alexander Hamilton. My husband. My hero. My betrayer.

When it comes to the streets, there’s rules.

They ain’t written down, and you won’t find them in a book.  It’s natural stuff you know the moment your momma let you out the house.  Kinda like how you know how to breathe without somebody telling you.

On her fortieth birthday Alison Penny woke, after a night of torrential wind and rain, to a world of stillness washed in pale sunshine.

Chapter 1: Up the Mountain to Alm-Uncle

From the old and pleasantly situated village of Mayenfeld, a footpath winds through green and shady meadows to the foot of the mountains, which on this side look down from their stern and lofty heights upon the valley below.

This book is written as a thriller, interweaving the story of the murder of a young girl and the story of Ida B. Wells.  A Black man becomes the prime suspect in the murder, putting him at risk of being lynched.  The book’s focus is partly on how the detective on the case “roped in" the true murderer with a complex scheme.

The book also tells the story of Ida B. Wells in her actions against lynching of Blacks, extra-judicial murders often accomplished by hanging the victim – the rope.  And there are numerous accountings of lynchings, including ones that occurred in Northern states.  We must disabuse ourselves of the notion that racism only occurs in the southern United States.

The book includes a conversation which I find it hard to forgive Susan B. Anthony for.  Perhaps it is good to be reminded that our national heroes are/were not perfect.   I read it for a book discussion in an anti-racist group. Well worth the read, with plenty to discuss.

256 pages (that’s for the hardcover version with illustrations).

Two words to describe this book:  wistful calm. Which is not to say there is not peril.  The language is poetic.  This is children’s lit, with complex vocabulary and sentence structure, but there’s nothing wrong with that.

My Dear Hamilton: A Novel of Eliza Schuyler Hamilton

The writing style of the first half of this book irked me, but it improved as the book went on, and I enjoyed reading the latter half.  The story is written from the point of view of Eliza Hamilton, Alexander Hamilton’s wife.  She was an amazing woman in her own right, with many lasting accomplishments, as well as in the part she played at the side of her husband in politics.

I have not seen nor heard the musical Hamilton, so I was not very familiar with the story of The Family Hamilton.  Their lives held both tragedy and triumph. As portrayed in this novel, among the American Revolutionary men, the only man who is not a total jerk is a foreigner, a non-American.

The way politics is described, not much has changed in 200+ years. Eliza Hamilton sides with the Federalists, and fears if the party of Jefferson wins office, the nascent union will collapse, with guillotines everywhere. I was left with the unanswered question -- how did we go from the Federalist Party of Alexander Hamilton to the Federalist Society of today?

I read this book for book club.  We had a great in-person discussion, outside, with face masks, on a chilly afternoon. We gathered around a fire, a scene related only faintly to General Washington’s Continental Army at Valley Forge.

This is the prequel to the book The Hate U Give by the same author, a Y.A. book about a black youth shot by cops and the aftermath of that violence.  As far as I can tell, this book does an excellent job of portraying the challenges, dangers, and horrors that young Black men faced in the 1990s (and to a great extent, still face today).  I read it for book club, and there was plenty to discuss.

Miss Plum and Miss Penny by Dorothy Evelyn Smith.  © 1959.   214 pages.  Recommended by Aileen of the blog The Small House in Charlottesville.

A most enjoyable tale about an unexpected houseguest, along with a plentiful amount of tea drinking.  This book was available on Kindle for less than $5.00.  I was delighted to discover at the end of this edition a long list of books under the title “Furrowed Middlebrow,” a collection of publisher Dean Street Press.

Audio book published 2006(?), read by Johanna Ward.  Translator not named -- and that bothers me.  The translator is important.

I loved this book as a child.  I see now that I had a propensity to love books with overly sunny characters. I also loved the story of Pollyanna, although that love derived partially from my fascination-horror of the notion of taking calf’s foot jelly to an ill person as a gift.  This audio book version of Heidi was well narrated, and as a whole was useful to me as a sleep aid.  There is an element of classism in the story, as well as a facile theology that might be okay for little kids but doesn’t cut it in today’s world.

Posted by Common Household Mom at 5:21 PM No comments:

History of These United States, the month of April

History of These United States, the month of April

The last item (April 22; McCleskey v. Kemp) is for a court case that some have deemed the death penalty's Dred Scott ruling, that is, one of the greatest failures of the Supreme Court. I had never heard of this court case.

From the month of April

Dr. Martin Luther King Jr. is assassinated on the balcony of the Lorraine Motel in Memphis, Tennessee.

Civil rights activist Bayard Rustin is arrested for sitting with a white man on a public bus in Chapel Hill, North Carolina, and spends 22 days on a prison chain gang.

Five Black and Latino teens are arrested for raping a jogger in New York City’s Central Park and spend more than a decade in prison before being exonerated.

Posted by Common Household Mom at 3:09 PM No comments: