Youngest Daughter said, with excitement, “In band class today we watched a leadership video.  I learned that if you quickly clasp your hands together with your fingers interlocked, then if you’ve got the left thumb on top then you are right-brained, and you are a good kisser, but if...”

YD:  A good kisser.  But if the right thumb is on top then you are left-brained, and a good thinker.

Husband: Where did you learn that?

YD:  I learned it from the guy in the leadership movie we watched in music class.  The guy’s name was Tim.

Me: Why were you watching a movie in music class?

(Husband and Son imagine Monty Python’s Tim the Enchanter starring in a leadership video.  Teaching people to clasp their hands together.)

Husband:  Why does the left thumb on top mean you are right-brained?

Husband:  Which side do you use to talk with?

YD:  Well, what side of your mouth are you using?

Husband:  I speak out of both sides of my mouth.

I’m glad my daughter learned some good lessons about leadership from this video.  By Tim.  In music class.

No wonder the election is going the way it is.
Posted by Common Household Mom at 9:24 PM 4 comments:

That’s me this morning before dawn, opening and closing the door (which makes far louder a noise than I intended), turning on all the hall lights by mistake, interrupting the few other early morning risers.  I’m just bumbling around at 6:15 in the morning, wondering who Jesus is.

This year at the retreat we have an honest-to-God prayer room.  Some participants have asked for this for years, but for whatever reason it didn’t happen until this year.  I thought that simply an empty room with a few chairs would suffice.  After all, one can pray just about anywhere, right? Happily, somebody else, not me, is in charge of setting up the prayer room.

Early Saturday morning I decide to go to the prayer room to say a quick prayer for my parents.  I am always saying quick prayers for my parents, so I’m expecting nothing special. What I find is different and better than a sparse room.  The lights are dimmed and there are candles, a figurine of people standing in a circle holding hands, a mini-waterfall, and some books.  One is titled “Jesus Calling.”  Well, I guess Jesus is calling me to stay in this room a while. 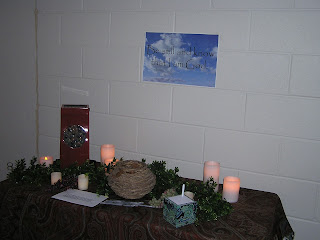 For a while I just stand, contemplating the quiet and calm. Then, feeling too closed in, and I decide to open the blind.  It is still quite dark, but the outside floodlights illuminate the steady snow, falling on the trees and the bushes, on the road and the fields, on the just and the unjust, on the weak and the strong, on all the children of God.  I think of my father in Parkinson’s Land, of my mother in Caregiver’s Land, and all the others stumbling through life and the approach to death. The falling snow is too much beauty to comprehend. 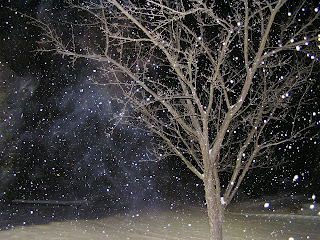 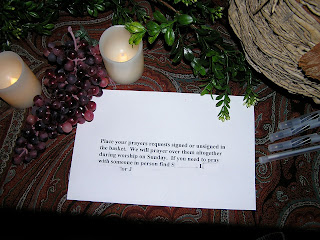 There are paper and pens for writing prayers.  This is helpful, as it makes me put my prayer into intelligible words.  I haven’t found out this morning exactly who Jesus is, but I have found a place where I can write him a note, say what’s going on, bare my soul, cry my eyes out, and thank God for reminding me of beauty and sorrow so early in the morning.

A few minutes later I am heading to the exercise class, ready to start my day.

It is now a week later.  I am not sure anymore exactly what I wrote in my prayer.  Just asking God to help my parents through their suffering, to give them joy and laughter as much as possible, and to be with them always.

Photos were taken after prayer, just before exercise.  I always find a way to stay busy.

Vignette from the Common Household

Youngest Daughter is in the kitchen baking a cake, singing the song “I’ll Make a Man Out of You” from Mulan with her own lyrics:  “Missus, I’ll make a cook out of you!... Let’s get down to stirring... with all the strength of a raging pie crust, as serious as the dark side of the cake!”  Earlier this afternoon, tired of her wasting her brain in front of Phineas and Ferb, I gave her a choice: “For dinner tonight you are going to make either a vegetable or a dessert.  You pick which one.”  She will not let me see the recipe she is using.  Maybe it’s carrot cake, which would qualify for both categories!

Meanwhile, Son is at the piano, pounding out John Williams' theme from the “Superman” movie.   It has a lot of octaves and loud chords.

I am in the office, agonizing over the date of next year’s retreat, listing the tasks my aunt needs to do to be ready to move to the retirement home, and trying to ignore my sore throat and impending cold.

Oldest Daughter is at college, doing who knows what, but probably pining away for the care package that I have not sent to her yet.  Sorry, sweetie!  I didn’t get to it yet.  But don’t worry, it will not have any singing rabbi dolls in it this time.

My husband is at work.  Good thing one of us did some work today.

What's going on with you right now?
Posted by Common Household Mom at 5:34 PM 5 comments:

A miracle occurred this morning: Youngest Daughter got herself up for school on time!

Meanwhile, I overslept and didn’t get out of bed until 7:20.  Maybe it’s because I face a big to-do list today.  My singularly uninteresting and suburban-housewifely list is below, for those of you who love reading lists.  It’s now 11:00 AM and I have gotten the groceries, made the appointment for the car, and started the laundry.  But it looks like there needs to be another miracle for any more of my list to get done.  (Notice how ‘write a blog post’ was not on my list.)  I think I ought to add 'Be grateful for small miracles' to my list.

Posted by Common Household Mom at 11:38 AM 6 comments:

I am outta here!  I am retreating for the weekend to my church’s annual women’s retreat.  There is a winter storm scheduled to start late tonight, into tomorrow morning, but I plan to get out of town before the storm hits.

Last night at dinner we had this conversation in preparation for the survival of the rest of the family, while I am gone.

Common Household Husband:  What should we have to eat while Mom is away?

Husband:  What about the main course?

Son:  We could have Twinkies, but they’re going out of business.

Son:  How about Cheese Whiz?

Husband:  I don’t think I’ve ever had Cheese Whiz.  Where I grew up, they have Hickory Farms. There’s nothing like a Hickory Farms port wine cheese ball! ... So, what do you want for the main course?

Son:  How about Chicken Parmesan?

Husband:  (glares at son, because Husband does not want to cook this weekend, and doesn’t know where to buy Chicken Parmesan)

YD: Do you mean Parmesan Chicken?

I am hoping, for the pizza delivery person’s sake, that the Wintry Mix is all over with by the time the Common Household wants its dinner Saturday night.  And it’s too bad that Hostess Brands couldn’t have held off on the bankruptcy, because purchases of their products will likely increase this weekend.

If you were away for the weekend, what would your household eat?
Posted by Common Household Mom at 2:52 PM 5 comments:

Today I welcome to the blog Youngest Daughter.  The opportunity to post here is one of two rewards she earned today by writing a page of math work neatly and correctly.  The other reward involved chocolate.

¡Hola! Mi con mucho gracias! I don’t know what I just said, but I would like to let you know that the name that I will be using from now on, Ailsa Roovene, is not a real name, but a pseudonym for another identity. Anyways, I have come onto this blog today to speak of an important topic: The Singularity of the Soul. The singularity of the soul is a very interesting thing to speak of, and also can be very confusing to write about. So, please, bear with me as I tell you all about it.

The singularity of the soul is a person’s self-awareness, and the non-anyone-else-awareness. This may not be common among you grown-ups, but it is certainly common among my fellow children. We of this age do not understand the problems of the outside world, (at least, most of us don’t) and don’t recognize others’ positions until they are described to us. And even then, we may not be entirely clear on the topic. For instance, I, until a moment ago, didn’t understand the difficulty of the teacher when grading 300 test papers. And even now, I still don’t fully grasp the enormity of the task set to those poor teachers. This generation doesn’t think of life beyond their scope of experience, and doesn’t grasp the difficulty of those in other positions that we have not experienced ourselves.

In my opinion, this is because of the protected lifestyles that most American children now lead. We don’t understand the situation of starvation, because we have no idea how that could be in the perfect world that we know. (Of course, some children actually do understand the difficulty of these people, and the problems of the world. These children are called “those who have the ability to step in to others’ shoes”.) Ahem. Anyways. We don’t understand how the world could have evil in it that isn’t pure evil, or good that isn’t pure good. Our life is centered around ourselves and our friends, not caring for those, say, in Africa or India. Even if we are told, we don’t care, since it isn’t important to the lives that we lead currently. The only evil we are experienced with is the evil in movies and video games, and we know that these aren’t real. We can’t care about the difficulty of others in other places, even if we are told about it, because we don’t have the scope of experience to understand their pain.

I hope you enjoyed my talk about: The Singularity of the Soul. ¡Adios!
Posted by Common Household Mom at 8:16 PM 6 comments:

What’s a girl to do when there is a scant 2 inches of snow on the ground?  Go sledding anyway! 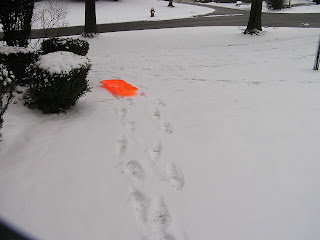 Despite being in the final stages of planning the church women’s retreat, I decided to brave the cold with Youngest Daughter yesterday.


We had a grand time. Playing outside eased the emptiness caused by Oldest Daughter’s departure back to college.  Trudging up the short hill kept at bay my frustrating uselessness in the face of my Dad’s illness and my Mom’s frantic caregiving.  The snowfall may have messed up somebody’s day, but it was right on time for me. 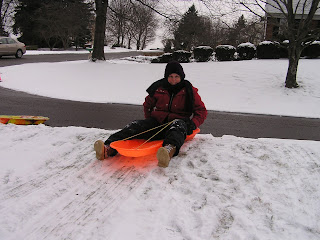 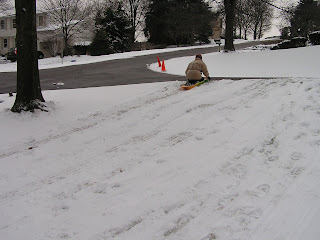 Then today, Youngest Daughter was all, “I’m calling my friends to invite them over!”  She rarely has this idea on her own, so I was all for it.  Soon we had four girls running around in the snow. 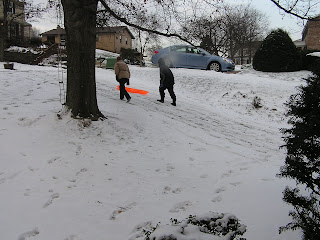 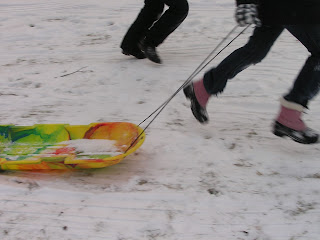 Enough energy to RUN up the hill. 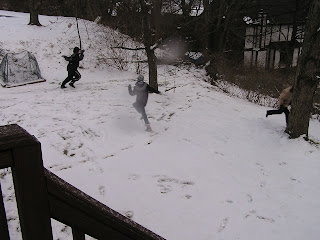 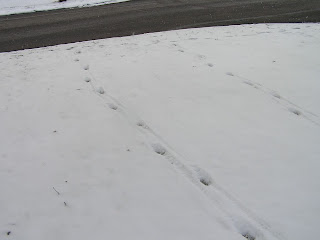 Another creature had been out there in the night or early morning.  Rabbit? Deer? Dog? Cat?

The girls stayed out there for a long time.  Good thing, because it is forecast to rain tomorrow.  This snow will be GONE. 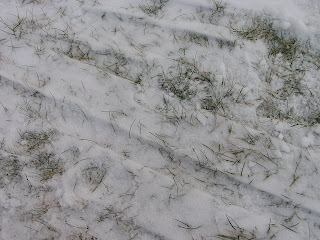