I got up at 5:30 AM to make special blueberry streusel muffins for the first day of school. I figured the scent of baking would be a pleasant way to inspire my two high-schoolers to truly wake up for the occasion. Common Household Son took the bait, but CH Daughter abstained.

The day had an inauspicious start for the riders of Bus #4. Their mother (me) insisted on going for a walk just at the same time as they left for the bus, and, remarkably, on exactly the same path they take to the bus stop! This seemed to be a petty annoyance to my daughter, but was irrelevant to my son. Perhaps he was placated by the muffin. More likely he just didn't notice I was there. Just when we arrived at the bus stop, I felt a great need to stop and rest, at least until the bus came.

A gaggle of teenage girls arrived. We waited, and waited. After 20 minutes, no bus. Sigh. I trudged back home, got the car, and picked up my kids at the bus stop. The gaggle of girls declined my offer of a ride to school. It was 7 a.m. when we left the bus stop.

Half an hour later, after making my deliveries at the two different schools, I was back home just in time to wake up Ms. Grouch for elementary school. But she was grateful for the muffin, and managed to get ready with time to spare. Thankfully, her bus came on time. 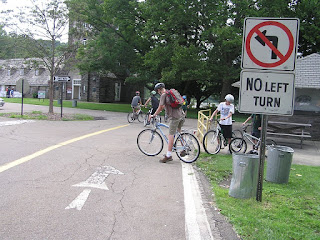 Yesterday I went on a bike ride with the Boy Scouts. My main fear, beforehand, was that these adolescent powerhouses would leave me in the dust and that I would be carried off to the hospital on a stretcher. That, and dogs – those were my main fears.

There were 8 scouts, 3 Dads, and me, Lone Mom-of-Scout. It was soooo good to get back on my bike again! My task was to ride at the back of the group, keeping my Mom-eyes pealed for injured Scouts, so that I could leap off my bike wih a flourish of my super-Mom cape, and attend to the injuries (by calling 9-1-1).

But as one parent astutely pointed out to me, I forgot to bring a first-aid kit. We didn’t have even a single band-aid with us. It just never occurred to me that it would be useful, since I was imagining things like broken legs, bloody spokes, and especially dog teeth embedded in human flesh. A first-aid kit is no good for things like that. Plus, all the Boy Scouts have been trained in administering first aid using random things that they find lying around in the woods, or by ripping their $40 scout shirts into tourniquets and cloth strips for binding wounds. It’s just the Boy Scout Way. (So is calling 9-1-1.)

We had no injuries. Not even a scratch. Given the impetuousness of many teenage boys, and the huge number of people in the park, I consider this to be a miracle from God. I had a most enjoyable ride, since I was riding with a younger scout who had a smaller bicycle and less robust muscles than the rest of the group. He did not complain, whine, or quit. He just kept going, at a pace that was easy for me.

We had perfect weather. This meant that it was also perfect weather for joggers, walkers, super-fast cyclists, skaters, one unicyclist, and (gasp) people with dogs. Lucky for us, the dogs all obeyed the law, and were on leashes. The guy who was riding the unicycle was also trying to walk two dogs, but wasn't having great success when we passed him.

Here comes my pet peeve. The joggers just couldn’t stand going single file, even on the part where the biking/jogging lane is right next to the main road. They just had to go two or three abreast. This meant that we cyclists had to pull out into the car lane in order to pass them. This is not trivial when some of the cyclists are 11 years old. Share the road, joggers!

This was our troop's first bike ride. I can’t wait until the next one. It will probably be next year at about this time of year.
Posted by Common Household Mom at 3:30 PM 3 comments: 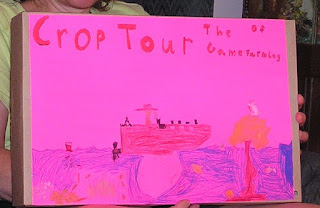 My dear Youngest Daughter, with guidance from Dad, made this board game for me as a birthday present!
Posted by Common Household Mom at 10:52 PM No comments: 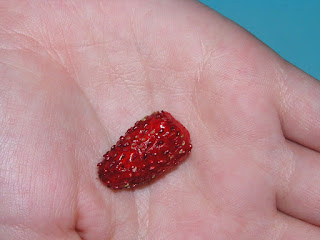 Our total strawberry crop this year. Better luck next year. 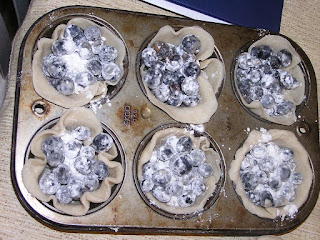 Oldest Daughter made these cute, delicious little blueberry pies! Yum! This photo was taken before they were cooked. The blueberries are store-bought, not home-grown. And it's definitely better that way.
Posted by Common Household Mom at 4:09 PM No comments: