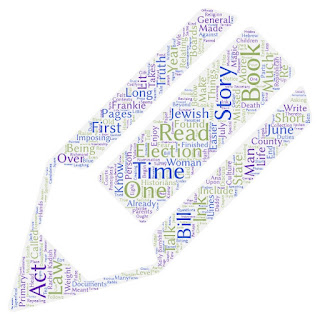 Below are the first lines of the 6 books I finished reading in July, which include one children’s lit and one short story collection. I was delighted to read plenty of fiction, following a non-fiction-heavy reading list for the previous month.

It was against my parents’ principles to talk about death… Nor would they discuss religion beyond a most superficial level.  “I’m Jewish.  Daddy is Jewish. You’re Jewish.  End of story.” (said my mother).  Asking too many “spiritual” questions meant that you had too much time on your hands.

AN ACT Amending the act of June 3, 1937 (P.L.1333, No.320), entitled "An act concerning elections, including general, municipal, special and primary elections, the nomination of candidates, primary and election expenses and election contests; creating and defining membership of county boards of elections; imposing duties upon the Secretary of the Commonwealth, courts, county boards of elections, county commissioners; imposing penalties for violation of the act, and codifying, revising and consolidating the laws relating thereto; and repealing certain acts and parts of acts relating to elections," as follows:

Let me begin afresh.  Perhaps, this time, to tell the truth.  For in the biting hush of ink on paper, where truth ought to raise its head and speak without fear, I have long lied.

Chapter One: They Notice

Look at the man and woman in the foreground of this photograph.

I am Ana. I was the wife of Jesus ben Joseph of Nazareth. I called him Beloved and he, laughing, called me Little Thunder.

Can’t We Talk About Something More Pleasant?  By Roz Chast.  Graphic memoir.

My second time reading this. I read it because the library Summer Reading Bingo had a square for “book with a blue cover.” The story seems more pointed, reading it at the same time as Being Mortal.

HOUSE BILL No. 1300 Session Of 2021, By Republicans Of THE GENERAL ASSEMBLY OF PENNSYLVANIA

Referred to committee on state government on JUNE 10, 2021

As a reading experience, terrible.  As a potential law, not as awful as some state election bills already signed into law in other states (Georgia).  My state rep supported this bill and tried to say it would make voting easier, but it would not make it easier.  The law was passed in the Republican-controlled legislature, but the Governor vetoed it.

Dual stories, one of historians fighting over recently found documents from the 1600s, and the other the story of the person who penned those documents.  That person was Ester Velasquez, a Jewish woman, an orphan who moved from Amsterdam with the blind rabbi who took her under his wing and made her his scribe.  She eventually takes on various false names in order to correspond as a man with philosophers, including Spinoza and Hobbes.  I found the 1600s story interesting, but didn’t much like the story about the historians.  I did not like the writing style, and felt the book did not need to be such a huge tome.  But other reviewers gushed over this book.

A tale of magic that takes place in Iowa.  Enjoyable.

I’m not usually fond of the short story genre, but I greatly enjoyed these stories, especially after reading the torturous prose of Rachel Kadish and the mind-bending magic of Kelly Barnhill.  McCall Smith spins stories from photos in the archives of The Sunday Times.

A few excerpts from different stories:

She missed the ladies’ nights at the Club; she missed the tea parties where she was able to condescend to the wives of junior officials; she even missed the things of which she disapproved. Disapproval may provide as much a raison d’être as wholehearted endorsement; who amongst us does not enjoy at least some of our animosities?

If life is dull—as it often is for teenagers—then the presence of a cultural anthropologist might be just too much of a temptation.

He could have made life easy for me, but he realised that this would not give me the best start. Things that you have not achieved yourself are always less rewarding than the things you have earned through your own hard work. All I ever received from my father was a gift of four thousand pounds when I turned twenty-one—and a share in the shops, of course. But that came later, and by that time I had already built up my own business.

My reading of this book suffered from having read it right after reading The Weight of Ink.  This book was another book about a woman wanting to write, but being suppressed by the Jewish culture of her time.

Posted by Common Household Mom at 4:32 PM No comments:

What We Learned This School Year 20/21: Covid Edition

Here are some selections from the broad swath of what our graduating senior, Younger Daughter, learned during her final year of college.

What Our Graduating College Senior Learned

This class was about archives.  The cadaver (physical body) - the ones used in medical school - can be thought of as an archive.  I learned that in this case, one must destroy data in order to use it and preserve it.

I learned that anatomy textbooks used to be like pop-up books. And that before the 1800s the way people got cadavers was - if people were condemned to death and hung, hospitals were allowed to use the bodies.

(Mom’s comment: She spent a lot of time thinking about cadavers.)

Really cool!  I learned about viral recombination and the viral reproductive system.  I learned that people are using bacterial DNA to form computer circuits to store data that can then be transformed back into movies, books, and other information.

(Mom’s comment: SAY WHAT?! DNA is used to store movies?!)

I learned that it is apparently difficult for many people to give an engaging 15-minute presentation.  Most people don’t know how long 15 minutes is.  I learned about autophagy:  your body is supposed to chew up mitochondria, get rid of them, and remake them later.  However, as you get older, your body gets worse at doing this.

I learned that professors like to use undergraduates as free labor to do their lab work.

I learned how to put together a slide presentation. I learned that however interesting you make a presentation, no one will show up (neither in person nor online).

I learned how to write scientifically, which was more fun than I thought it would be.  I learned how to summarize while still keeping an interesting tone and maintaining a low emotional level.

I learned about Foucault - his theory on the evolution of medicine from the French Revolution until now.  I learned that I don’t want to read Foucault any more.

I learned that I was losing focus by this point.  It was very hard to do this class by zoom.

I learned about the Hox genes - they determine where your arms go and where your legs go, so they don’t get mixed up.  The Hox genes work in a cascade fashion.

I learned that a sea urchin turns its body inside out when gastrulation is finished (except “inside out” is not exactly it). Gastrulation is the formation of the layers of the body  - the endoderm, the ectoderm and the mesoderm.

I learned that there is a primitive streak in the chick.

(Mom’s comment:  I have no idea what any of this means.)

I learned that I hate working with flies so much!  They look cute under the microscope, but they are so annoying!  You have to put them to sleep, but there are always some who will not go to sleep (and more complaining about flies).  And fly embryos are even more annoying.  I also learned that I was the only one in the class who kept a proper lab notebook.

(Mom’s comment:  She said that before the move had actually taken place.  It’s done now.  But she certainly will have to move again at some point.)

What the Common Household Mom Learned

I learned to be so very grateful for my mother’s life and wisdom at the same time as I miss her greatly.  I learned that grief has no timeline, and that each of us grieves differently.

I learned that democracy is fragile and far more dependent on norms than we expect it to be.  That is a lesson of the past few years, not just this school year.

I learned that 39 candidates for one office is too many candidates to reasonably keep track of (actually it was for 9 seats of the same judicial office but no matter how many seats, 39 is too many).

Posted by Common Household Mom at 5:00 PM No comments:

History of These United States, the month of August 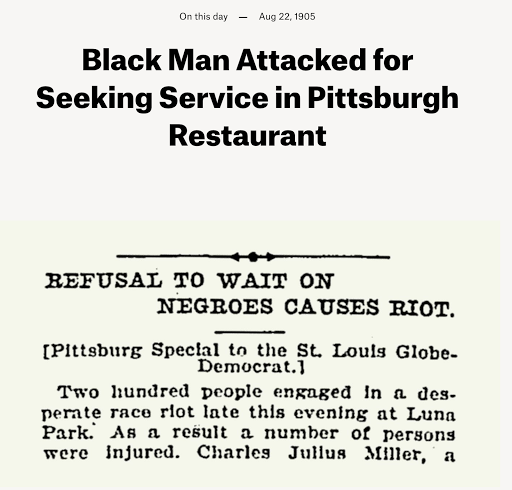 From the month of August

In Philadelphia, Pennsylvania, 6,000 white transit employees strike after eight Black men begin training as motormen on street cars, a job that had been reserved for white men only.

White nationalists protest removal of a Confederate statue in Charlottesville, Virginia; the next day, a protestor dries a car into counter-protestors, injuring 19 and killing one woman.

Posted by Common Household Mom at 2:54 PM No comments: