Trump campaign staffers
Fall all over themselves
In self-promotion.

Russians on Facebook
Harm to Ongoing Matter
And fooled most of us.

Papadapoulos
Is fun to say, and so is
Veselnitskaya.

At June 9th meeting,
Only topic – adoption
Or so Trump dictates.

A crucial footnote1278
Claims that stolen emails are
Not property.  Arrrgh!

The admissible
Evidence does not meet the
Standard, says Mueller.

“We determined not
to make a firm judgment on
the case.”  Oh, Mueller.

In safes everywhere,
Contemporaneous notes
Lie in wait, as proof.

President asks staff
To lie, cover up, and change
The facts to falsehood.

Reasons for firing
Comey are shifting sands on
The beach of Trump’s mind.

President wants staff
To do the dirty work and
Say “Sessions, you’re fired!” 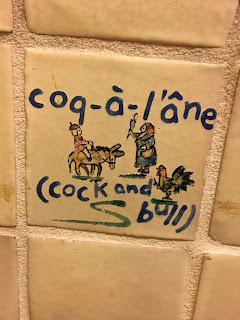 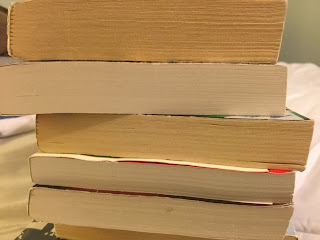 Below are the first lines of the books I finished reading in March.  Seven books in one month is a lot for me.  I had some sleepless nights and a visit to the Old Folks’ Home at the beginning of the month.

Book 1
1: español/Spanish language
I am learning to speak.
To give myself a way out.  A way in.

Book 2
In May of 1945, only a few weeks after the fighting had ended in Europe, I was rotated back to the States, where I spent the remainder of the war with a training company at Camp Crowder, Missouri.

Book 3
When people ask me what I do—taxi drivers, dental hygienists—I tell them I work in an office.

Book 4
Chapter One: Owl Post
Harry Potter was a highly unusual boy in many ways. For one thing, he hated the summer holidays more than any other time of year.

Book 5
A country road.  A tree.  Evening.  Estragon, sitting on a low mound, is trying to take off his boot.  He pulls at it with both hands, panting.  He gives up, exhausted, rests, tries again.  As before.
Enter Vladimir.
Estragon:  (giving up again).  Nothing to be done.

Book 6
Chapter One: A Doctrine of Anger and Fear
On the day fascists first altered the direction of my life, I had barely mastered the art of walking.  The date was March 15, 1939.

Book 7
Tsuris ahead. That’s what Morris Feldstein, a man who spent his entire life avoiding anxiety, danger, or tsuris, thought as he sat in his dining room.

Book 1
Piecing Me Together by Renee Watson, © 2017.
A Young Adult novel by African American author.  I really enjoyed this book.  The main character here is quite different from the character in the YA novel I read in February. This book plainly portrays some of the challenges facing all teens, and some particular challenges facing African American teens.  It also introduced to me artists who use the medium of collage.

Book 2
Defender of the Faith, by Philip Roth.  A short story published in The New Yorker Magazine in the March 14, 1959 issue.
I read it for book club.  The narrator is Sergeant Nathan Marx – not the usual “Philip Roth” narrator that I have come to expect from a Philip Roth novel.

Book 3
Eleanor Oliphant is Completely Fine, by Gail Honeyman, © 2017.
An engaging novel about a young woman who has suffered a lot and has to figure out how to heal her soul.  The book includes the drinking of tea, which automatically makes me more prone to like it.  It takes place in Scotland, although not much is made of the setting.  We will discuss this at book club in a few months.

Book 4
Harry Potter and the Prisoner of Azkaban, by J.K. Rowling, © 1999.
It is so comforting to re-read these books, with the familiar characters and plot.

Book 5
Fascism: A Warning, by Madeline Albright, with Bill Woodward. © 2018.
I think the dedication of this book is meaningful:
To the victims of Fascism
Then and now
And to all who fight Fascism
In others
And in themselves.

Book 6
Waiting for Godot, by Samuel Beckett.  A play. First performance: 1953.
This is a play in which nothing happens.  I think it is famous for that, as a premier example of the Theater of the Absurd.  Is it true that there is “Nothing to be done,” as the characters state so frequently? Younger Daughter and I read most of it out loud, and I finished the rest on my own.

Book 7
The Global War on Morris, by Steve Israel.  © 2014.
A very funny book by a (then) seated U.S. Congressman.  The story takes place mostly during the George W. Bush administration, with Cheney and Rove featured, as well as cameras and spy computers gone amok.  I learned a new Yiddish word from this book - Gottenyu, which most likely means "OMG".