The Gospel of John, Chapter 3: God loves the universe

The Gospel of John, Chapter 3

Nicodemus, a Jewish leader, comes to Jesus at night.  N. recognizes that Jesus is from God, because of the signs Jesus is doing.  Jesus says that to see the kingdom of God a person must be born anew, or born from above. He uses birth as a metaphor for spiritual renewal.  N. doesn’t get it.

Then Jesus pushes further, talking about not just seeing but entering the kingdom of God, which must be obvious what it is, because it is not defined.  Only those who are “born of water and Spirit” can enter the kingdom of God.  Jesus says to N., you just do not understand.

Speaking in the plural, Jesus says, we are testifying to what we have seen, but you all reject our testimony. But the way the scene was set, I had assumed Jesus was alone with Nicodemus.  Whom is he accusing of rejecting his testimony?

Then, Jesus utters these famous words:

John 3:16 “For God so loved the world that he gave his only Son, so that everyone who believes in him may not perish but may have eternal life.”

But for me, it’s the next verse that is more important:  “God did not send the Son into the world to condemn the world, but in order that the world might be saved through him.”

But then the author of the gospel again goes for the antagonistic dichotomy - those who believe are saved; those who don’t believe are already condemned.  Light vs. dark.  The language here does not make mention of second chances.  It does talk about evil deeds, which is a shift from the language of belief to something more concrete, but still not very well defined.

3:19-20 And this is the judgment, that the light has come into the world, and people loved darkness rather than light because their deeds were evil.  For all who do evil hate the light and do not come to the light, so that their deeds may not be exposed.

Then Jesus & Co. go to Judea.  Both Jesus and John the Baptist are there baptizing folks.   John the B. says, again, that he himself is not the Messiah.  He speaks of the Messiah in the metaphor of a bridegroom.

The last paragraph of the chapter is not speech attributed to anyone.  It’s more a mini-sermon about those who accept Jesus’ testimony vs. those who don’t.  Heaven vs. earth.

Images and themes: being born from above, baptism, Messiah

Posted by Common Household Mom at 5:54 PM No comments:

The Wisdom of the Common Household Husband

Last year was a challenging year, but the Common Household Husband helped steer our ship of household on a reasonable path.  Here is some of his wisdom that helped get us through.

Younger Daughter helped herself to a chocolate covered almond, even though she doesn’t like almonds.

Me:  You’re not going to waste that almond, are you?

The CHH made himself a cup of French Vanilla tea.  Then he poured Peach Schnapps into it.  I said, “I am predicting that is not a good taste combination.”

He tasted it, and said, “Hmmm.  It’s like wearing a plaid shirt with rainbow suspenders.”

I was making the roasted egg for the seder plate.

Me: How long should I roast the egg?  Twenty minutes?

We were discussing brands of grape juice, as a Jewish-Christian household is likely to do.

Me:  Is that some kind of physics joke?  I don’t get it.  But if you had said you prefer Schrödinger’s Grape Juice, I would understand.

But Bernoulli’s Grape Juice – that wakes me up in the morning!

(Apparently we were not paying attention during the summer, perhaps because we actually did some traveling and moved our younger daughter twice.)

CHH told me, "The rabbi called to wish me gud yontif." Then he explained further, "Yontif is Jewish for yom tov."

At dinner, we were talking about how and when to celebrate all the upcoming holidays. I looked at the calendar and said, “Christmas is on a Saturday.”

Son:  Is there a special prayer for when shabbat falls on Christmas?

Me:  Dad is talking about going “hunting” on Christmas.

Son: When has Dad EVER gone hunting?!

CHH:  It’s a euphemism for Las Vegas.   Speaking of hunting, I met a guy at the casino today who said he went hunting and shot a moose.

Me, reading facts about moose, to try and find out if they are endangered: Moose grow to be six foot nine inches tall.

CHH: Joseph Conrad was 6 and a half feet tall.

Me: That’s an odd factoid to know about Joseph Conrad.

Me: : Joseph Conrad, the author of Heart of Darkness?!

CHH:  No, the guy who stars on The Rifleman.

Me:  Do you mean Chuck Connors?

(For the record, Chuck Connors was 6 ft 5 inches tall.  The internet does not know how tall Joseph Conrad was.  Apparently moose, at least the Northwestern Moose, are not considered endangered.  Also for the record, the CHH did not get to go hunting or to Las Vegas.  He regrets the latter.  )

CHH, complaining that the news is always the same:  “Every day Congress is subpoenie-weenying, and nothing ever happens.”

CHH, talking about the true history of the Exodus:  The manna was actually 9 egg sponge cake.  And after they ate it, someone said, ‘My mother’s was better.’ 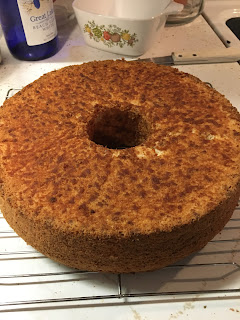 CHH’s suggestions for sequels to Man’s Search for Meaning by Viktor Frankl:

Man's Search for a Comfortable Chair.

(If he had read Man’s Search for Meaning he would not be making light of it.  Or maybe he still would, because of the way 2020-2021 has messed with our brains.)

Me:  Can we splurge and get new bathroom rugs?

Me:  I’ve been thinking about it for a long time.  Our rugs are old and probably harbor a lot of germs.

CHH:  All I want is a heated toilet seat with Bluetooth technology in it.

The Gospel of John, Chapter 2: Water into wine, and smashing corruption

The Gospel of John, Chapter 2

The Wedding at Cana story shows us that Jesus and the disciples went to parties, that Jesus hung out with his mom, and that Jesus makes the best wine out of water.  But Jesus seems detached from the party guests.  Maybe he is an introvert who is depleted of energy by being around a lot of people.

Then it is Passover, and Jesus & Co. go to Jerusalem, where Jesus drives out the merchants and moneychangers from the temple.  He takes a stand against the corruption of people whom I imagine are quite powerful. The disciples are perhaps watching but not participating - it isn’t clear. I’m going to assume that in this scene Jesus is a one-man riot machine, smashing the windows of the shops and throwing merchandise around.  He really messes stuff up - pouring out the coins all over the place and upturning the tables.  It’s a righteous action to call out such profit-making on the very grounds of the temple.

But this action does not endear Jesus to the authorities.  “The Jews” (this term in this gospel disturbs me) ask Jesus to justify his riot.  Jesus speaks of the temple as a metaphor for himself, foretelling his death and resurrection, but they don’t understand.

The author tells us that because of the signs that Jesus is doing, many “believed in his name”.

Jesus seems aloof in this gospel, so far. He is not acting all good-shepherdy.  But he is challenging the powers that be.  That is probably comforting to a religious sect that feels beleaguered by powerful authorities.

The author continues to portray Jesus as omniscient.  Verse 2:24-25 says “But Jesus on his part would not entrust himself to them, because he knew all people and needed no one to testify about anyone; for he himself knew what was in everyone.” This is a verse I do not recall hearing often in worship.

Metaphors:  Raising up a new temple in 3 days represents Jesus’ resurrection.  The wine might also be a metaphor.

People: Jesus, his Mom, the disciples, the people at a wedding party,  Jesus’ brothers, merchants and moneychangers at the temple in Jerusalem, “The Jews”, believers.

Posted by Common Household Mom at 10:35 AM No comments:

Reading the Gospel of John 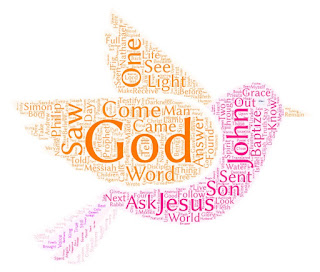 Periodically I undertake to read a whole book of the Bible.  Not the whole Bible, mind you, just a book.  I have never been able to do those projects of reading the whole Bible in a year; I am weak and a sinner, for sure.  I’ve tried, but get stuck in Leviticus, like most of the world.

Reading a whole book of the Bible, rather than in snippets the way scripture is delivered to us in church on Sunday, gives a better sense of the message and flavor of that book.  Last year I read 1 Samuel, because it seemed to pertain to political leadership, although it ended up just to be a tragedy. In 2020 I read Ruth, because we suddenly needed a topic for a retreat.  As books of the Bible go, Ruth is a great read - it’s a romance, without an awful lot of accusatory prophecy, and has very little smiting or battles with Jebusites.

Now seems as good a time as any for me to undertake a reading of the Gospel of John.  It’s my least favorite of the four canonical gospels.  More than the synoptic gospels, the language in John is often a puzzle to me, and I find it also to be strongly anti-Jewish.  I don’t relate as well to the portrayal of Jesus as I do for the other three gospels. We’ll see how far I get.

Here are my observations for Chapter 1.

The Gospel of John, Chapter 1

The gospel begins with the famous poem “in the beginning was the Word”.

(No, I can’t really read Greek, but I think it looks lovely.)

We are immediately confronted with the concept of the “Logos”, the “Word”.  Book lovers should love this - word!  This Logos (a very full word) was there at the start of all creation, and is synonymous with God, the gospel writer tells us.

The major metaphors so far:  Word, light, children of God, born.  The major concepts so far: life, testifying, grace, truth, and belief.  Verse 5 is a verse of unadulterated hope, and one of my favorites:

The weary world rejoices, for yonder breaks a new and glorious morn.

The start of the gospel is a reiteration of the creation story, in a very John-ish sort of way.  The writer uses simple, short words, but each of those words is so loaded that the sentences carry huge meaning, or alternately, the meaning is obscured.

But already in verse 10-13, antagonism and division is introduced.  The world is split into two: those who accept the Word and those who don’t. It’s a very black-and-white view of things, which perhaps reflects that the writer was part of a community feeling threatened. At Christmas-time when we read these initial verses of John, we usually skip over these verses and go straight to the “full of grace and truth” in verse 14.

In verses 19-42, John the Baptizer appears on the scene, confronted by questioners sent by “the Jews.”  John the B says he is not the Messiah.

More metaphor:  John the B. notices Jesus, calling him “the Lamb of God” and “the Son of God.”

John the B. is responsible for introducing the disciples to Jesus.  Then Jesus heads for Galilee, collecting more disciples along the way.