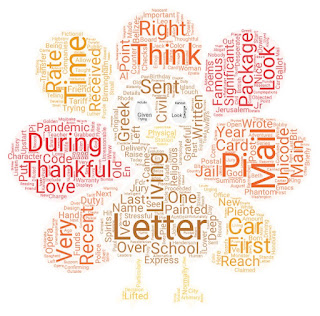 What is a piece of mail (a letter, not a package) you received in the mail (physical letter delivery) for which you are thankful?

A.  I am very grateful for the poems I received, they lifted my spirits during a stressful time.

B.   Can't think of any.  I don't normally look at mail. Last time I did, I think was a jury-duty summons during a pandemic in 2020, for which I was not thankful.

C.  Nice letters from car companies who have been trying to reach me about my car warranty. So thoughtful!

E. The letter confirming the transfer of funds from my old 401K into my new 401K

F. I recently came across a hand-painted birthday card from my friend.  I particularly like the painting on the card.

G. When I was living in [foreign country], I was always desperate to get packages, but their tariff rates were arbitrary and unreasonable.   One time I objected to the charge for my package, and the postal woman then proceeded to raise the rate, because I was being "upstart"!    I then put the original lower amount on the counter, grabbed the package, and left.  Unfortunately for me, the police station was right next to the post office.

H.  I am thankful for the unemployment checks I received by mail while I was briefly unemployed during the pandemic.

I.  I’ve been in touch with my first grade teacher over the past year …. I am thankful that…..  she instilled in me the love of reading.

Name a famous letter, and why it is significant.

A.  Can we include fictional letters? The Color Purple is written as a letter to God, and that’s a very important letter. It details the main character’s story when nobody else would listen to it. The power of which is diluted a bit when I can’t remember the main character’s name.

B.    The Greek letter pi, because pi are round.

That displays as mojibake (文字化け) in Emacs, but you can see what it

C.  Open Letter to Kansas School Board in 2005, by Bobby Henderson. The letter satirized the school board's recent decision to allow Intelligent Design to be taught as an alternative to evolution in public schools and claimed the right for equal time to be given to teaching about the Flying Spaghetti Monster. Pastafarianism was born.

a. George Washington’s Letter to the Hebrew Congregations of Newport, Rhode Island in August of 1790.  G.W. expresses his  support for religious freedom in the nascent US. But reading the letters today, it just stands out blatantly how hypocritical he was.

b. Letter from Birmingham Jail, by Martin Luther King, Jr.  He wrote it in 1963 to moderate white religious leaders, while he was imprisoned in the city jail in Birmingham, AL for demonstrating for civil rights and desegregation.

E.The letter from Albert Einstein and Leo Szilard to FDR warning that Germany could develop atomic bombs, and urging that the US start its own nuclear research.

F. The series of letters sent by John Adams to his wife Abigail.  They are significant because they express his deep love of country and deep love of her, and did so eloquently.

H. The letter written by Jimmy Carter placed aboard the Voyager spacecraft, along with the Golden Record, is significant because it may be the first human letter to one day reach alien civilizations.

I. The letter of Paul to the Corinthians, thirteenth chapter of the first epistle. Without love, we are nothing.

b. The letter carried by the snail in Frog and Toad.

As always, your post is delightful. And I especially smiled at the Frog and Toad part. Snail mail--heh.